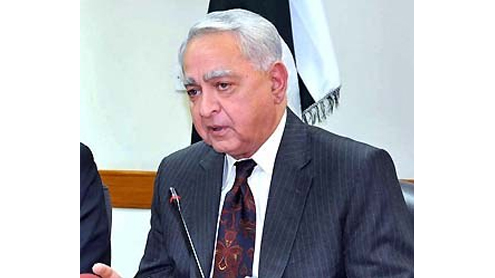 Addressing a press briefing here, Bokhari insisted that the country is facing rupees six billion to seven billion corruption daily adding that this massive corruption is inflicting huge losses to the national exchequer.He said tax revenues worth billion of rupees could be generated for the national exchequer by plugging loopholes in the system and stemming out corruption.Bokhari said it is estimated that Rs12 billion are siphoned off on daily basis because of corrupt practices while tax revenues worth Rs7 billion are evaded per day.

He said the reason of daily loss of rupees six to seven million to national treasure was corruption and inefficiency.Issuing a corruption paper today, he said Pakistan has tax-to-GDP ratio is at 9 percent which could easily be 18 percent like in rest of the world, adding the country may annually receive 2500 billion rupees in taxes, i.e. Rs7 billion daily.Not three, there are only two pillars of state now in Pakistan, the NAB chief said clarifying that a pillar consists of legislators and executives and the other one is judiciary.

The legislators, he added, appoint the executives of their choice and such is happening on both federal and provincial levels.”I have already said three months back that Pakistan is losing huge amount of money to corruption on daily basis”, he added.Bokhari said favoritism in appointment of key posts has become tragedy for the country while federal, provincial and local governments are appointing jobs to their favorite candidates without merit.

He said 1700 cases of corruption are registered in NAB while the Bureau had prevented corruption in 173 federal and provincial departments.NAB chairman said to prevent corruption regularity system would be corrected adding that FBI would investigate from those people who do not pay taxes.He said there is no chance of military rule in the country and every act would be perfumed as per constitution. NAB chairman said they are ‘ready to join any forum to prove what they said’. It termed objection of federal cabinet in this regard ‘pointless’. – Onlinenews