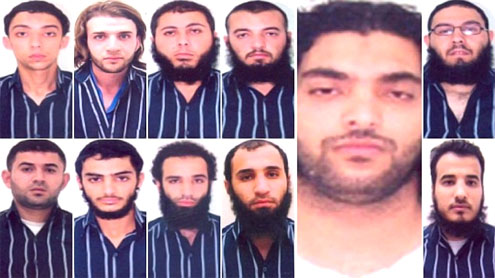 A deadly terrorist attack designed to kill thousands which had been codenamed ‘9/11 the second’ by plotters has been foiled by Jordanian security forces, it was claimed tonight.

Authorities say the al-Qaeda cell wanted to inflict ‘the heaviest human losses possible’ with coordinated suicide strikes on shopping centres and Western diplomats in the country’s capital capital Amman.Last night 11 suspects who planned on carrying out bombings using smuggled weapons and explosives brought from Syria were in police custody, it is claimed.Had the plot come to fruition, the death toll could have reached thousands and destabalised the country’s security and had been going on since June.

But intelligence agencies had been monitoring the conspiracy from day one, Jordanian official said.The country’s state TV broadcast mugshots of the suspects – all in their 20s and 30s, all bar one wearing the same issue dark blue shirt, with most of them sporting long beards – identifying them as ‘militants’.Announcing the foiled plot, government spokesman Sameeh Maaytah told an impromptu press conference that the suspects are all Jordanian and are in police custody.

‘They were plotting deadly terror attacks on vital institutions, shopping centers and diplomatic missions,’ he said.’They sought to destabilize Jordan,’ he said. ‘They plotted against Jordan’s national security.’A statement by Jordanian intelligence said an investigation showed that the group ‘adopts the ideology of al-Qaida’ and that it nicknamed its terror plot as ‘9/11 the second’ – a reference to the Amman hotel blasts, which happened on Nov. 9, 2005.Since June, the suspects have been surveying targets across the country, bringing in rockets from Syria to use in the alleged plot, the statement said.

The militants sought to carry out their attacks in stages, it added, with initial attacks on shopping centers and foreigners in Jordanian hotels, followed by more deadly strikes with powerful explosives and chemicals on Western diplomatic missions and unspecified ‘vital national sites’.One planned attack involved firing rockets at a district in the Jordanian capital that houses the U.S., British and other diplomatic missions as well as housing for expats and Western diplomats, it was claimed.The statement said al-Qaida ‘explosive experts’ based in Iraq and elsewhere have assisted the suspects with manufacturing home-made explosives.

The statement did not say when the suspects were arrested, but Maaytah – the government spokesman – said Jordanian intelligence apprehended them in the past few days.’Their plans included getting explosives and mortars from Syria,’ a security source revealed.A security source said the suspects had manufactured explosives ‘aimed at inflicting the heaviest losses possible’.’The group was able to devise new types of explosives to be used for the first time and planned to add TNT to increase their destructive impact,’ said the source.

The same security source said there was a crucial link with Syria where President Bashar al-Assad is battling to put down an uprising against his family’s rule.’Their plans included getting explosives and mortars from Syria,’ the security source told Reuters, saying the militants had sought to strike at a time of regional upheaval when the country’s security establishment is over stretched.The authorities said they had seized large quantities of ammunition, machine guns and other items such as computers.

The militants were training to use ‘suicide bombers using explosive belts and booby-trapped cars’, said another security source.Jordan is a key U.S. ally in the Middle East and Israel’s peace partner.The Arab kingdom has often been targeted by al-Qaeda and other Islamic militants. It regularly arrests terror suspects and puts them on trial.Government spokesman Sameeh Maaytah says the suspects are all Jordanian and are in police custody.

He said the men had brought in arms from neighboring Syria to use them in the alleged plot.He also said al-Qaida operatives based in Iraq have been assisting the suspects with manufacturing home-made explosives.He said Sunday that Jordanian intelligence agents arrested the suspects in the past few days.Had the plot come to fruition, it is feared the death toll would have dwarfed a recent car bombing in Beirut – also linked to the civil war torn neighbouring country.

This is the latest incident to be linked to the spiralling violence spilling out of neighbouring Syria.Lebanon’s prime minister said this week that a massive car bombing originated from Syria.The bomb exploded during rush hour in the mainly Christian district of Ashrafiya killed eight including a top security official, and injured nearly 100 – deadliest bombing in Beirut in four years.Prime Minister Najib Mikati said the blast is linked to the intelligence chief’s recent case, in which he exposed an alleged plot by Syria to sow chaos in Lebanon. – Dailymail

Newsnight boss steps down over damning evidence of Savile ‘cover-up’