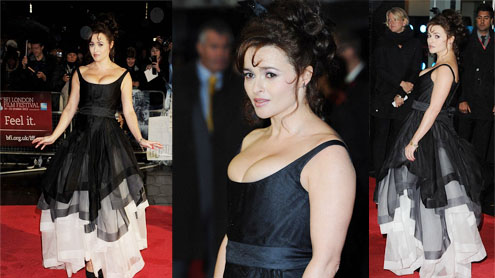 She wowed the crowds in a figure-hugging purple gown on Saturday night, and now she’s done it again.

Well-known for her curvaceous figure, Helena Bonham Carter squeezed herself into a floor-length black and white gown for the premiere of Great Expectations as part of the BFI London Film Festival at the Odeon Leicester Square on Sunday night.After picking up a prestigious Fellowship Award at the Film Festival Awards on Saturday, the Fight Club actress was clearly in good spirits, making the most of her time in the spotlight.Usually known for her kooky style, the star has opted for more of a classic look for this year’s Film Festival.

Pairing the eye-catching black chiffon dress with black skyscraper heels, the 46-year-old looked sophisticated, but added some edge to her look with an asset-boosting neckline.Clearly adhering to the old adage ‘if you’ve got it, flaunt it’, Helena seemed happy to be exposing some flesh, despite the chilly weather.The partner of director Tim Burton, who plays Miss Havisham in the eagerly-awaited adaptation of the Dickens novel, was joined on the red carpet by co-star David Walliams.The comedian, who plays Uncle Pumblechook in the Mike Newall film, looked dapper in black tie and cosied up to his wife Lara Stone as he posed for photographs.

The Dutch model donned a slinky black dress for the festival’s closing gala, and wore her blonde hair poker straight.Earlier in the day, the rest of the cast gathered at the film’s photocall ahead of the closing night gala.Up-and-coming Brit actors Jeremy Irvine and Holliday Grainger, who play Pip and Estella, showed off their natural chemistry, while Robbie Coltrane and Ewen Bremner chatted as they posed for photographs. On Saturday night, Helena highlighted her hourglass figure in the purple satin dress, which she teamed with black heels and a matching handbag as she posed up with her Frankenweenie director beau.

Burton, meanwhile, looked suave in his black suit and tie with a white shirt and polished patent shoes for the event, held at Banqueting House on London’s Whitehall.Helena has always managed to cause a stir with her red carpet outfits, which have ranged in the past from eye-catching dresses to odd shoes.However, Helena said in a previous interview that she is proud to be unique in the way she dresses.She said in a previous interview: ‘I think fashion has been hijacked by the fashion industry creating rules on what one should wear and I feel like breaking the mould and seeing that the world won’t crumble. Sometimes I get it right and sometimes I get it wrong.’

Helena and Tim, who have worked together on many films over the years including Alice In Wonderland and Sweeney Todd, were both presented with a Fellowship at the award ceremony.The Best Film award went to Jacques Audiard’s moving drama Rust And Bone starring Oscar-winning actress Marion Cotillard.Other stars who attended the BFI Awards included British actress Helen McCrory – the wife of Homeland star Damian Lewis – and War Horse actor Tom Hiddleston. – Dailymail