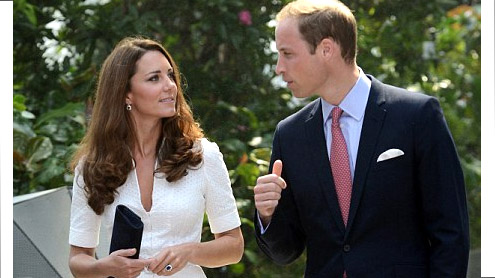 Photographs of Kate Middleton changing her bikini bottom have been published in a Danish magazine, reigniting the privacy scandal surrounding the Royal couple.

Celebrity magazine Se Og Hor (See And Hear) has gone further than any other publication and printed a 16-page special of photographs, including three of the Duchess of Cambridge changing her bikini bottoms – taken from the front.The photos appear to be from the same set of shots originally taken while Prince William and his wife were holidaying in the South of France.There are thought to be up to 200 photos taken of Kate and William when they were sunbathing at a secluded chateau.

The most revealing photograph in Se Og Hor, which appears on the front page of the magazine, shows the Duchess changing into a pair of blue bikini bottom.Kim Henningsen, Se Og Hor’s editor in chief, was unabashed by the threat of legal action and declined to say who sold the photographs or how much was paid for them.

He said: ‘It’s a set of unique photos from an A-class celebrity. It is my job to publish them.’Kate and William won a landmark injunction in France to stop further publication of the images by Closer magazine, under the threat of a €100,000 (£80,000) fine.They have also handed over all files containing the images to representatives of the couple on the orders of the judge, after they were ruled a ‘brutal’ invasion of privacy.

The court made no ruling for the magazine to name the photographer, however, and it has the right to protect his or identity under France’s laws on protection of journalistic sources.But the release of the unseen pictures of Kate confirms fears that the injunction will do little to halt the worldwide spread of the pictures.The revealing photographs of the Royal couple relaxing on a private balcony were first published in French magazine Closer, before a 26-page special was published in Italy’s Chi and Ireland’s Irish Daily Star. – Dailymail