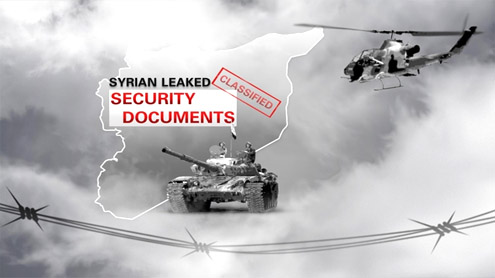 These documents were obtained with the assistance of members in the Syrian opposition; which has preferred not to elaborate on how they got hold of them, Al Arabiya said.The channel said that it has verified and authenticated hundreds of these documents and that it has decided to disclose ones with substantial news value and political relevance.

“The documents will reveal – for the first time – shocking information which includes details about what happened to the Turkish fighter-jet downed by Syria and incidents which reveal the Syrian regime’s role in attempting to shake Jordan’s and Lebanon’s stability,” Al Arabiya said.The newly leaked documents reveal the Iranian and Russian roles in aiding the Assad regime and the establishment of a joint command force which intervenes in all matters related to the Syrian crisis.

Furthermore, Hezbollah’s role is also disclosed through the documents, showing how the armed group received written and clear orders from the highest authorities to ‘eradicate’ Syrian activists and carry out a series of bombings.The 2-week long pre-recorded program airs Saturday to Thursday. It commences on Saturday, Sept. 29th, 2012 at 16:30 GMT, on Al Arabiya’s “Al Hadath” channel.Al Arabiya’s English language portal – http://english.alarabiya.net/ – will be posting subtitled versions of the program translated into English, supported by original reporting and downloadable copies of the newly leaked documents. – Alarabiya