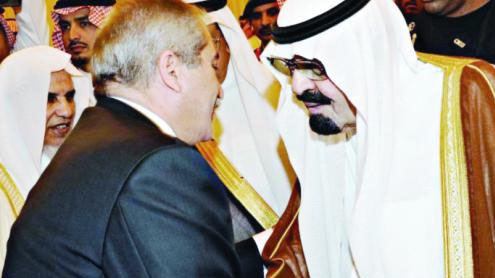 King Abdullah expressed his happiness over seeing the faces of prominent personalities like Grand Mufti Sheikh Abdul Aziz Al-Asheikh in the gathering.“I am thankful to all of you. I am a servant of you, a servant of the small and big and I pray to Allah to help me perform my duties in the best manner and in a way that would please Him,” the king said.He urged Saudis to thank God for his great blessings including peace, security and stability. “We have to thank God for every move we make,” he added.

He commended the unity and cohesion between the Saudi people and leadership. “Delegations from different parts of the Kingdom are coming to meet King Abdullah and renew their allegiance,” he said and hoped the government would continue its efforts to strengthen the unity of Saudi people. The mufti also prayed for the king’s long life.Sheikh Salah Al-Bedair, imam and khateeb of the Prophet’s Mosque, also spoke. “The people of Madinah take this opportunity to express their allegiance toward your leadership. We will be in peace with those who are in peace with you and will fight those who are at war with you,” he said.Al-Bedair emphasized the importance of unity to achieve progress and prosperity.

“There is no religion without unity and there will be no unity without a leadership and no leadership without obedience,” the imam said. He added: “We want King Abdullah to remain as a supporter of the weak, preventing injustice and helping the oppressed.”Abdul Bari Al-Hassani, a Saudi student, spoke during the ceremony on behalf of young Saudi men and women who took part in the Makkah Youth Forum. More than 300,000 youths had participated in various cultural, literary and sports contests during the event. He conveyed the love and greetings of Saudi youth to the king and renewed the allegiance on behalf of the Makkah people. “We are your ambitions. Be confident that the whole nation is with you,” he added. – Arabnews