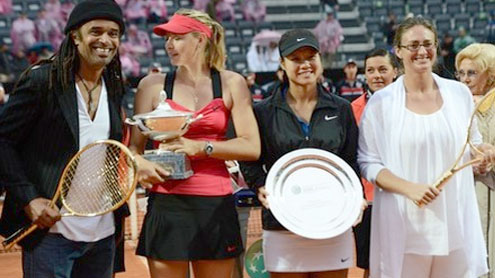 The world number two claimed the 26th trophy of her career, but it was a struggle for the Russian who found herself 6-4, 4-0 down before the players were forced off by rain for over two hours just as the final set tiebreak was about to commence.“It was a crazy match,” said Sharapova. “Either one of us could have own it. There really is no loser.”Sharapova now leads Li 7-4 in their series, with the Chinese player coming close to winning her first title since claiming her historic French Open title last June.

Sharapova added a second Rome crown to the Stuttgart claycourt title she earned in April.The men’s final, between holder Novak Djokovic and Rafael Nadal – a repeat of the 2011 edition – may have to be held over to Monday with weather forecasts calling for evening rain.Officials and police were wary of mixing tennis fans with rival football supporters heading for Sunday night’s Italian Cup final between Juventus and Napoli at the Olympic Stadium, just a few hundred metres from the tennis arena.

Already during the final, hovering helicopters, exploding fireworks and chanting fans outside the fenced-off courts made for distractions.Sharapova and Li were sent off court with the third set poised at a tiebreaker to decide the match. They came back more than two hours later and played seven additional minutes before Sharapova prevailed.The Russian looked flat in the first set, losing an early break and the set.

With Li leading a set and 4-0, the momentum suddenly shifted as Sharapova woke up to reel off eight consecutive games, winning the second set to level and going 2-0 up in the third as Li’s famed problems with finishing off wins surfaced again.But Sharapova suddenly went off the boil, reaching 4-1 but then dropping two serves as Li recovered.

As steady rain fell, the determined pair played on, with a brief stoppage at the two-and-a-half-hour mark while players sat in their chairs.Once it resumed, neither seemed inclined to close it out, with Sharapova saving a match point in the 12th game from a forehand winner.As the tiebreak arrived so did more rain, which forced the players off court and brought the covers on. – Arabnews