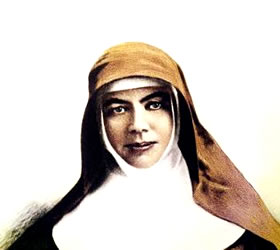 VATICAN CITY: Thousands of pilgrims arrived in Rome this week to witness the canonisation of Australia’s first saint, Mary MacKillop by Pope Benedict XVI, as “Mary Mania” grips her native country.MacKillop (1842-1909), a nun and teacher who fell out with church authorities after denouncing a paedophile priest, is due to be formally recognised as a Catholic saint at a mass in the Vatican on Sunday.At the ceremony the pope is also set to canonise Brother Andre (1845-1937), a humble monk from the Canadian province of Quebec who was reputed to have healing powers, as well as another four saints from Italy, Poland and Spain.Cardinal George Pell, the archbishop of Sydney, has arrived in Rome to help celebrate the mass and many nuns from the Sisters of St Joseph of the Sacred Heart — the order that MacKillop helped found — are also expected.Australian consular authorities have parked a camper van on the edge of St Peter’s square to help pilgrims and there will be an evening of Aborigine dances and art in the Vatican museum later on Friday ahead of the ceremony.Australian officials said 8,000 people were expected in Rome for the mass.”This is the biggest contingent of Australians to travel overseas in peacetime ever,” Pell told reporters in the Vatican ahead of the mass.Nationwide celebrations are also planned in Australia for Sunday’s canonisation, with MacKillop’s former home town of Penola expecting up to 20,000 worshippers and special masses across the country.

Wine from Penola will be served at Vatican functions linked to the event.A part-religious, part-nationalist, part-media frenzy has seized Australia ahead of the canonisation, with “MacKillop” the musical playing to sold-out shows and a nightly projection of her image on the Sydney Harbour Bridge.MacKillop already has stamps and pop songs in her honour, along with merchandise including bumper stickers and keyrings that is selling briskly. Her fans have also set up a Facebook page and a Twitter account in her honour.Tim Fischer, Australia’s ambassador to the Holy See and a former deputy prime minister, said MacKillop’s life was one of “a great Australian.”

“I think her life and work is such a dramatic story of conquering adversity that it has a resonance far and wide,” Fischer told AFP in an interview.”Her story would make a great Italian grand opera,” he said.”Famous women who have contributed to the fibre and fabric of the nation have often been underplayed,” he added.Mary MacKillop, who devoted her life to building schools and helping the poor, has been a revered figure in Australia since shortly after her death.Born to Scottish parents in Melbourne, she supported her large family as a teenager through her work as a governess, clerk and teacher.

She also had a rebellious streak and was briefly excommunicated from the Catholic church in 1871 for “insubordination” after a series of rows with senior clergy including reporting a priest who molested a child.Senior Sister Brigette Sipa, director of MacKillop Place where the saint-to-be is buried, said exposing the abuse was just part of MacKillop’s work of educating poor children and caring for the needy.”She did report the priest, but that wouldn’t have been the main reason for her ex-communication, there were lots of reasons,” Sipa said.

Sipa also played down calls by Australia’s Broken Rites group for MacKillop to be made the patron saint of abused children.The proposal came as the Catholic church battles a widespread scandal over child abuse in countries Belgium, Germany, Ireland, Britain and the United States, including allegations that senior clergy covered for paedophiles.

Canonisation is only the end point of a long process of documentation and research into the life of would-be saints by Vatican authorities that often lasts several years and must include at least two proven miracles.Pell said the the example of MacKillop’s saintly life would boost the Catholic church in Australia and could also help convert non-believers.”Certainly this canonisation will help, it will encourage people,” he said – Timesofindia