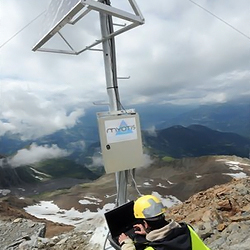 French engineers are set to drain a lake that has formed under a glacier on Mont Blanc, and threatens to flood the St Gervais valley.

The lake, which is said to contain 65,000 cubic metres (2.3m cubic ft) of water, was discovered last month during routine checks.

The engineers plan to dig a hole into the ice and pump the water away.

In 1892, water from an underground lake flooded the Saint Gervais valley, killing 175 people.

The valley beneath Mont Blanc is a popular tourist area, and is home to some 3,000 people.

The hidden lake, trapped beneath the Tete-Rousse glacier, holds enough water to flood the valley in 15 minutes, potentially affecting 900 families.

A system of alarms was put in place in July.

Nicolas Karr from France’s National Forests Office told the BBC’s World Today that draining the lake was a delicate operation.

“We don’t have much time to operate because after mid-October, we don’t know if the weather will be OK to go on with our works.”

Warmer temperatures may have played a role in creating the lake, melting the surface snow, but it was a cold snap that was thought to have frozen the natural drainage routes.

The engineers will drill a 22cm diameter hole in the ice to begin pumping a third of the water from a pocket 200m below the surface.

They say they are not quite sure what will happen once the water is removed, but ahead of the operation local authorities closed the final section of the Mont Blanc tramway, which passes close to the glacier.

Locals have also been briefed on an evacuation plan.