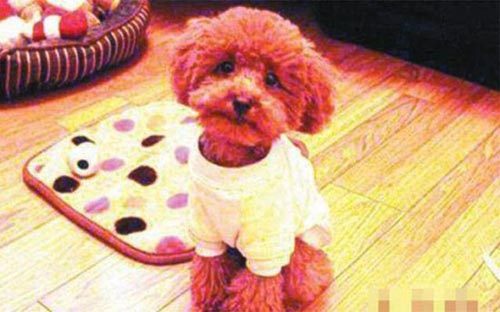 I’ve seen plenty of dog lovers displaying their affection in rather questionable ways, but this is a first – a woman in China loves her so much that she loves eating its hair! Wang Jing, 27, is a self-proclaimed canine lover from Heilongjiang province – she actually gave up her regular job to become a dog tailor.

Two years into the role, she claims that she has swallowed over 1,000 hairballs. It all started when Wang adopted a cute little poodle called ‘Kuku’, four years ago, just after she graduated from college. She soon became obsessed with the furry brown pup, feeding it imported dog food, pig liver-mixed rice, ice cream and dried fruit. Still, things were pretty much normal until she began to feel enormous amounts of stress from her job as a graphics designer.

One day, she’d given Kuku a shave and then, out of curiosity, put a pinch of its collected hairs into her mouth. To her great surprise, she found the taste and unique texture irresistible. So every time she shaved Kuku, she saved the hairs, kneading them into hairballs to eat as a snack. Over time, she realised that the hair she liked the most were the ones that fell off after Kuku’s bath.

“They are sweet like chocolates,” said Wang. “It smells nice and tastes good in my mouth.” She eats the stuff every day now, and hopes to become an expert in dog fashion pretty soon. Her story has been covered widely by local media, who are speculating that she probably suffers from an eating disorder called Pica. The disorder is characterized by a unique craving to eat things that are not real food. -odditycentral