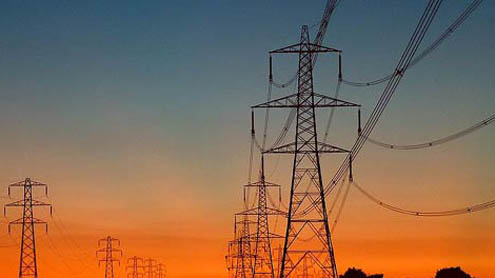 ISLAMABAD: The federal cabinet on Monday accorded approval for signing of the Memorandum of Understanding (MoU) between Pakistan and India for trade of electricity.

It was informed to the federal cabinet the Ministry of Water and Power had initiated negotiations with India in this regard and the World Bank has undertaken to finance feasibility study of the project. The federal cabinet also accorded approval to the signing of MoU with the Export and Import Bank Bank of Turkey for a Credit Line of $300 million for Pakistan. The credit line will be utilised for promotion of trade between the two countries.

The federal cabinet met with Prime Minister Nawaz Sharif in chair at Prime Minister’s office. According to the official details released after the federal cabinet meeting, the cabinet noted with satisfaction the Karachi Stock Exchange has crossed the record level of 27,000 points which was an evidence of business community’s confidence in the economic policies of the government. The prime minister said our country had great potential and if peace and security was restored, we could achieve significant economic progress and development in short time.

The cabinet gave its consent to the signing of a number of MoUs including ex-post facto approval for MoU with Norinco International (People’s Republic of China) on energy and mass transit projects and approval for an MoU with India for trade of electricity. According to the MoU between the Pakistan and Norinco International, it is agreed both sides shall pursue cooperation in the fields of mass transit, energy particularly solar energy projects in different provinces of Pakistan, setting up of industrial cities along the Motorways, solar irrigation projects and road sector projects.

The MoU contains provision allowing Government of Pakistan to identify any other sectors in which it requires technical, financial, and managerial assistance, knowledge or expertise of Norinco. Formal Approval of the agreement on Economic and Technical Cooperation between China and Pakistan was accorded by the cabinet for Interest-Free Loan of RMB 100 million for a period of twenty years including ten years grace period. The loan will predominantly be used for education purposes.
The cabinet considered and accorded approval to the Negotiated/Signed Agreement on waiver of visa requirements for holders of diplomatic, special and official passport between Pakistan and Kuwait and also gave approval for ratification of the agreement. The cabinet gave approval for signing agreement on re-admission of persons residing without authorisation between Pakistan and Turkey and also accorded approval for ratification of the agreement.

The agreement will strengthen cooperation between the two countries to combat illegal immigration effectively and establish procedures for identification, safe and orderly return of persons who do not otherwise fulfill the conditions for entry to, or reside on the territories of Pakistan or Turkey.
The cabinet gave approval for initiation of negotiations between State Bank of Pakistan (SBP) and Central Bank of UAE on Banking Supervision and Exchange of Information for the banks operation in both countries.

The cabinet accorded approval for initiation of negotiations between SBP and Polish Financial Supervision Authority on signing of MoU on Banking Supervision.
Approval in principle was also accorded to start negotiations on MoU between supreme audit institutions of Pakistan and Supreme Audit Court of the Iran on Co-operation on Auditing in Public Sector.

The cabinet gave approval for initiation of negotiations between SBP and Nepal Rastra Bank on signing of MoU cooperation in the field of Supervision and Exchange of Information for bank’s operation in both the countries. Approval was given by the cabinet for initiation of negotiations between SBP and Central Bank of Tunisia on signing of MoU on Banking Supervision and Exchange of Information for smooth functioning of cross-border branches and facilitation of financial activities.The cabinet gave permission in principle to start negotiations with the Government of the Republic of Iraq for entering into an agreement concerning the Organisation of Pakistani Manpower Employment in the Republic of Iraq. The agreement provides for sending Pakistani manpower to Iraq.
Approval in Principle was accorded by the cabinet to start negotiations and signing of MoU on recognition of Certificates Pursuant to Regulation I/10 of the International Convention on Standards of Training Certification and Watch-Keeping for Seafarers between Pakistan and Jordan. The MoU will enhance cooperation between maritime administrative bodies in both countries on security, safety and protection of maritime environment and control of vessels.

The cabinet granted approval for signing the MoU on cooperation in the field of merchant shipping between Pakistan and Egypt under which both countries would collaborate in the field of merchant shipping in accordance with their objectives and requirements for economic development.The cabinet approved signing of MoU between the Union of Chamber of Commerce and Commodity Exchanges Turkey and Ministry of Railways Pakistan. The MoU provides for undertaking a feasibility study to suggest ways and means to attract commercial traffic in order to run international container train service between Islamabad and Istanbul on regular basis.

The cabinet consented to Pakistan’s signing the Multilateral Convention on Administrative Assistance in tax matters. The Convention aims to facilitate international cooperation for better enforcement of national tax laws while respecting fundamental rights of the taxpayers.

The cabinet gave approval regarding amendment in the Convention between the Islamic Republic of Pakistan and the Republic of Austria for the Avoidance of Double Taxation and the Prevention of Fiscal Evasion with respect to Taxes on Income. The convention provides for emphasis on proper exchange of information to check tax evasion and fraud.

The cabinet accorded approval for signing of Protocol on Cooperation in Science and Technology between Scientific and Technological Research Council of Turkey and Pakistan Science Foundation (PSF). The Protocol provides for joint research projects, exchange of scientists and information by holding joint workshops and seminars in various fields of science and technology.