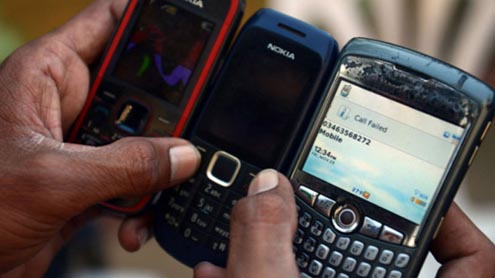 ISLAMABAD: Due to growing security threats and the use of cellular devices in terrorism-related activities, the Pakistan Telecommunications Authority (PTA) has banned the sale of mobile phones without its prior approval.

According to a letter sent to the Federal Board of Revenue (FBR), the telecom regulatory authority has directed custom officials not to clear consignments of cellular phones if the importer has not submitted design and IMEI (International Mobile Equipment Identity) details to the PTA.

Importers and manufacturers will now have to submit these specification details to the PTA to get approval under section 29 of the Pakistan Telecommunications (Re-organization) Act, 1996.

“No terminal equipment shall directly or indirectly be connected to a public switched network unless it has been approved by the Authority or an agency appointed by the Authority in this behalf subject to such conditions as it may impose, including conditions limiting its connection to specified types of telecommunication systems,” reads Section 29 of the Telecommunications (reorganization) Act 1996.

When contacted, a PTA spokesman confirmed that sale without the PTA’s approval of mobile phone type and IMEI number had been prohibited. He said customs officials and concerned companies have been informed that only those consignments of cellular phones would get clearance at ports which are approved by the PTA.

The official said that importers and cellular phone manufacturers have been bound to provide all technical details of the phones to the national regulator.

Speaking to this scribe, PTA officials said the condition had been previously relaxed in a bid to increase the sale of mobile phones. However, the sale of inexpensive, low-quality mobile phones either without unique IMEI numbers or fake IMEI numbers had soared during the past few years. The PTA had taken this strict decision of imposition of ban since cellular phone without IMEI numbers were being widely used in criminal activities and were causing hurdles in maintaining law and order.

It is to note here that every mobile phone has an individual IMEI number that is unique to it, and can be conveniently located with the right software. With this number, law enforcement agencies can work with service providers to retrieve stolen phones while service providers can block stolen mobile phones from functioning. The IMEI number is issued from Spain-based Global System of Mobile Association (GSMA). Billions of mobile phones of different brands being used around the world today are registered with the GSMA. -Dawn