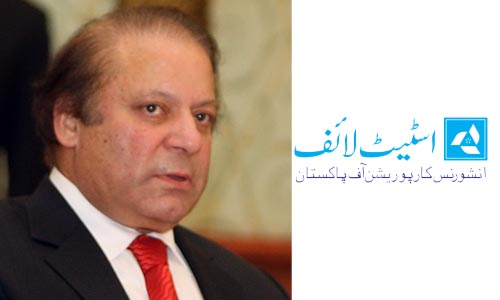 State Life Insurance Corporation of Pakistan (SLICP) has planned to introduce “Nawaz Sharif Awami Insurance Scheme” in the near future which will cover all Pakistani males and females having age between 25 to 60 years.

SLIC Executive Director, M Raeesuddin Paracha on Wednesday, while briefing the Federal Minister for Commerce, Engineer Khurram Dastagir on the functioning, performance and future plans of SLIC said that the scheme had been submitted to Ministry of Commerce (MoC).  While Divisional Head, Actuarial, SLIC, Faisal Mumtaz briefed the minister about overall scheme and the work out he had done on it. Dastagir appreciated the scheme. Paracha said that SLIC remained leading insurer in the country by extending the benefits of life insurance to all sections of society and meeting their commitments to their policy holders and the nation.

He said that from 2008 to 2013 SLICP has shown significant improvement and working to further achieve SLIC’s targets. Briefing on SLIC Board, he said that the federal government through a notification constituted the Board of Directors of State Life on March 20, 2014 but the chairman and Additional Secretary had to be notified to compete the board. He also briefed the minister on irregularities in appointments and inquiry into the matter the SLIC was carrying out whereas Dastagir directed him to submit the report on it till June 01. brecorder