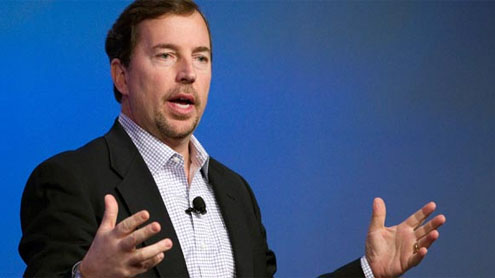 NEW YORK:  Yahoo Inc. Chief Executive Scott Thompson is stepping down after a controversy over a fake computer science college degree on his biography, the third CEO to leave the company in three years, according to a source familiar with the situation.

The move is a victory for hedge fund manager Daniel Loeb of Third Point LLC, which is Yahoo’s largest outside shareholder and brought the discrepancy in Thompson’s educational background to light. Thompson’s interim replacement, effective immediately, will be Yahoo’s global media head Ross Levinsohn, the source said. Yahoo was not immediately available for comment. Emails sent to Thompson’s official Yahoo email address were already bouncing back yesterday morning. The departure of Thompson, the former president of eBay Inc. division PayPal who was just hired in January, is another blow to a company that has been struggling to kickstart growth amid fierce competition from Google Inc., Facebook Inc. and other Internet companies.

Yahoo acknowledged last week that Thompson does not have a computer science degree despite what was stated in his official company biography and in regulatory filings with the US Securities and Exchange Commission. In its first-quarter 10-Q filing with the SEC last Wednesday, Yahoo acknowledged that “uncertainties” about Thompson and questions about the company’s “future direction” could hurt business opportunities and make it difficult to attract employees and business partners.  Loeb has been waging a bitter proxy battle to install a slate of four directors on the Internet company’s board, which he has accused of being dismissive of investors’ input and in need of restructuring capabilities and media strategies.

According to the AllThingsD blog, which reported Thompson’s departure earlier yesterday, Yahoo’s board is closing in on a settlement with Loeb that will give Third Point three board seats. The blog said Yahoo’s recently added director Fred Amoroso will be named chairman of the board. Levinsohn, currently executive vice president and head of global media for Yahoo, was previously head of the company’s Americas business. Before joining Yahoo, he was president of News Corp.’s Fox digital division.

According to Yahoo’s official website, Levinsohn holds a Bachelor of Arts in Communications from The American University.”He is well-respected in the Valley, Hollywood and on Madison Avenue,” said Jason Hirshhorn, a former MTV digital executive. “Yahoo has to lean into media and he has the plan.”