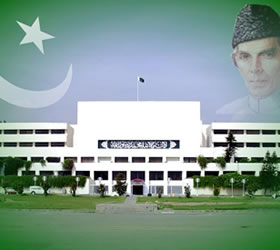 ISLAMABAD: The National Assembly on Monday adopted a unanimous resolution condemning  Indian violence in Occupied Kashmir  asked the government to extend  support to Kashmiris  and stressed upon the United Nations to ensure implementation of its resolutions on the issue. The resolution moved by Chairman Special Parliamentary Committee on Kashmir Maulana Fazlur Rehman that was later unanimously adopted by the Lower House of Parliament  which later started a debate on Indian human rights violations in Kashmir on an adjournment motion, suspending the rules.
“This House expresses dismay over the situation prevailing in Occupied Kashmir and  condemning the Indian brutal use of state force stresses India to stop massacre in occupied Kashmiri, withdraw its troops form state and urban areas, repeal black laws and lift the curfew,” says the resolution.
The House also demanded of Indian authorities to bring an end to media blackout, release thousands of arrested Kashmiri leaders and youngsters, not to impede fulfillment of religious obligations, not to close the mosques and allow international human rights organizations inside Kashmir.
The House reiterated that under the United Nations resolutions, international law, and universal declaration, Kashmiri people are making peaceful strife for their freedom what is their rights.
“Pakistan fully supports the struggle of Kashmiri people and assures Kashmir people that they are not alone in this strife.  Whole Pakistani nation is with them and would continue its moral, diplomatic and political support,” says the resolution.
The House made it clear that according to the United Nations resolutions, Kashmir is an unresolved issue and is not an internal issue of India.
“The House appeals to the international community not to be silent spectators in Kashmir issue rather it should force India to end brutalities in Kashmir and help resolve the issue,” says the resolution.
The National Assembly also asked the United Nations to ensure implementation of its resolutions and take practical steps in this regard. – App
Twitter Facebook Google + Linkedin Comments