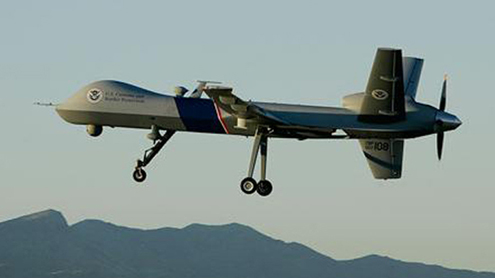 The drone fired three missiles targeting a seminary near Degree college in Tehsil Tal, which lies within the settled areas of the province. District Police Officer (DPO) Iftikha Ahmed said that the strike had left five people dead, and six others injured. Other sources claimed that the death-toll had reached eight. Those killed in the attack included three teachers and five pupils of the seminary.

The teachers were identified as Abdul Rehman, Maulvi Ahmed Jan and Mufti Hamidullah Haqqanni. Drones continued to hover above the area after the incident, locals reported. Some sources claimed that the clerics of the seminary were believed to be affiliates of the Taliban’s Haqqani Network. The last drone strike in the country was conducted on November 1 which had killed the then chief of the Tehrik-i-Taliban Pakistan (TTP), Hakimullah Mehsud, in North Waziristan tribal region.

This was the first attack by the US to occur outside Pakistan’s remote tribal region, after the anti-drone Pakistan Tehrik-i-Insaf (PTI) came into power in the province and could increase tension between Islamabad and Washington. The only other drone strike in the settled areas of the KP was carried out in Bannu district a few years ago.

The attack comes a day after Prime Minister Nawaz Sharif’s Adviser on Foreign Affairs and National Security Sartaj Aziz said while briefing the Senate Committee that the United States had assured Pakistan of not conducting drone strikes targeting the leaders of TTP if dialogue began between the two (Taliban and Pakistan government). -Dawn