by ToP
in Business, Featured, Govt.
0 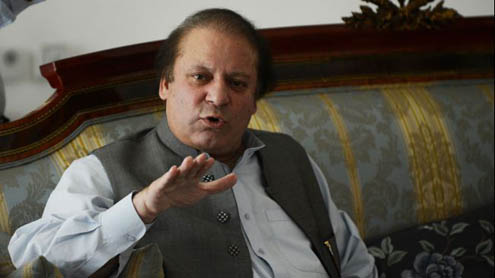 Prime Minister Nawaz Sharif Thursday announced various incentives for the highest taxpayers of the country as well as those bringing themselves under the tax net voluntarily.

Nawaz also announced establishment of PM Business Advisory Council besides unveiling a comprehensive reforms package to encourage business and investment opportunities in the country. Addressing a gathering of businessmen and industrialists at the Prime Minister’s Office, the prime minister said he would also establish an advisory council exclusively to deal with the issues confronting the agriculture sector of the country.

He said the Business Advisory Council would meet on quarterly basis to debate the issues and ideas to enhance business activity and attract foreign investment to the country. Nawaz announced incentives for the highest taxpayers and those bringing themselves under the tax net voluntarily. He said the government would issue Privilege Cards to 400 highest taxpayers to entitle them to VIP airport lounge, fast track clearance, gratis passport and baggage allowance worth $5,000.

Moreover, they would also be given excellence awards and the prime minister would also host a reception in their honour. He also announced exemption from any investigation about the sources of income for those who invest in construction, livestock, captive power plants, Thar Coal and mining in Balochistan. However, the industries including arms, explosives, fertiliser, sugar, cigarette, beverage, spinning, flour, ghee and cooking oil would not be eligible for this offer. The prime minister said anyone paying 25 percent more tax than the previous year would be given exemption from detailed audit and also extended the last date for filing of tax returns until December 15, 2013.

Prime Minister Nawaz announced exemption from penalties, default surcharge and detailed audit for those bringing themselves under the tax net voluntarily as well as the first-time tax payers. He told the gathering that the government has also exempted the taxpayers from FBR’s access to bank accounts. Prime Minister Nawaz said that to avail these incentives, it was required that investment is made in Green Field Industrial Project after January 1, 2014. Under the scheme the minimum investment required is Rs 25 million and it should create at least five jobs. Moreover, he said the immunity will not be available on proceeds of crimes relating to offences under the Narcotic Substances Act 1997, Anti-Terrorist Act 1997 and Anti-Money Laundering Act 2010. He said top 100 taxpayers each would be issued taxpayers recognition card to CEOs’, main shareholders, salaried and non-salaried individuals.

He said the top 400 taxpayers would be invited on March 23, August 14, and other state banquets on rotational basis, besides being allowed increase in their baggage allowance from $500 to $ 5,500. The Excellence Awards would be given to top 10 taxpayers in each category, he said. Nawaz said in order to encourage individuals to file their tax returns, they would be declared immune from penalties, default surcharge and audit if income tax returns for the last five years or missing returns for the last five years are filed and minimum tax of Rs 20,000 per tax year is paid. Moreover, he said the provincial governments will be engaged through the Inter-Provincial Coordination Division and Council of Common Interests to create ease of doing business by consolidating, rationalising and minimising the licensing, registration and inspection regimes.

They will also facilitate setting up of Special Economic Zones by recommending cases to the federal government. The provinces, he said, would also be asked to facilitate contract enforcement by setting up commercial courts. Prime Minister Nawaz said the country has rich investment potential, industrial base, and efficient entrepreneurs, but the dent caused by nationalisation policy of 1972 damaged the sector when around 32 industries were nationalised. He said had the country been keeping that momentum, exports would have surged to $300 to $400 billion instead of current $25 billion. -Dailytimes