Protests to be held at district headquarters; PPP proposes unity 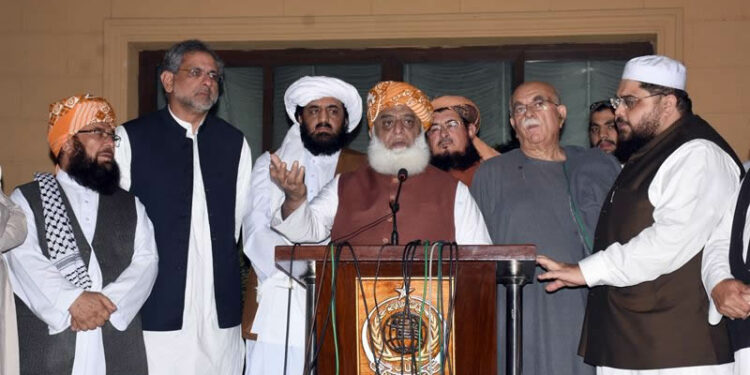 The Pakistan Democratic Movement (PDM) has decided to launch a nationwide agitation against government over rising inflation, a day after the federal government announced a major price hike for petroleum products.

The decision was finalized at a meeting of PDM leaders in Islamabad after the move was initially discussed in a phone conversation between PMLN’s Shehhbaz Sharif and PDM Chief Maulana Fazlur Rehman on Sunday.

Pakistan Peoples Party, which was originally part of the PDM, has also invited other opposition parties to unite against the government.

Besides increasing petroleum prices, the federal government has also hiked electricity and gas tariffs. Meanwhile, prices of edible oil and ghee have gone up. Food inflation and high energy costs have caused concerns among people.

On Sunday, Shehbaz and Fazlur Rehman agreed during a phone conversation that there would be protests, rallies, and marches across the country from the PDM platform.

People need to come out on the streets against inflation, unemployment, and the ongoing economic disaster, the two leaders said.

Fazlur Rehman had similar conversations with the leaders of other PDM parties.

Later, PDM leaders met in Islamabad. The meeting, presided over by Fazlur Rehman, was attended by Shahid Khaqan Abbasi, Awais Norani, Mahmood Khan Achakzai, and others.

Fazlur Rehman announced that after the Milad-un-Nabi (PBUH) commemorations on the 12th of Rabiul Awwal (October 19), PDM wokers would hold protest at district headquarters in every district of the country.

He said the nationwide movement over inflation would be launched with full force and the protests at district headquarters were the first step.

The protests would continue for two weeks, he added.

Meanwhile, PPP leader Shazia Marri has invited other opposition parties to unite against the government.

In a statement on Sunday, she said that when Yousuf Raza Gilani was elected to the Senate by opposition benches, the government was shaken to the core.

The unity of the opposition is necessary to send “the incompetent” home, she said, adding that Bilawal Bhutto Zardari continued to stand by the masses.