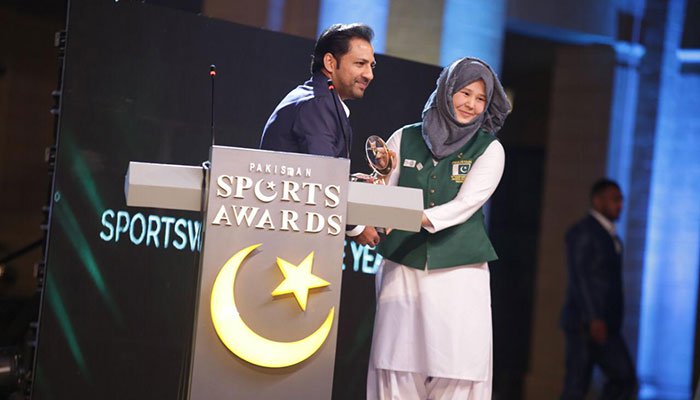 The first ever Pakistan Sports Awards were held in Karachi on Saturday evening to acknowledge the services and achievements of Pakistani athletes. Squash legend Jahangir Khan was conferred with the lifetime achievement award. Governor Sindh Imran Ismail presented him the trophy.

Pakistan’s champion wrestler Mohammad Inam Butt was declared the sportsman of the year. Inam had won the country’s only Gold medal in Commonwealth Games last year. Nargis Hazara, the Asian Games Karate medalist, was announced as the sportswoman of the year.

Lahore Qalandars’ players development programme was awarded the best CSR campaign of the year, while the PSL final in Karachi was judged as the best sports event of the year. The award for the best sportsperson with special abilities went to Aamir Ashfaq of Pakistan’s Blind Cricket Team, while Tariq Lutfi won the best coach’s award during the colourful and prestigious event which was attended by people from different walks of life.

Sana Mir and Shahid Afridi were the winners of people’s choice award in women’s and men’s category, respectively. Renowned journalist Rasheed Shakoor from BBC Urdu was announced as the best sports journalist of the year. Zainab Abbas and Ramiz Raja were awarded best TV host and sports commentator, respectively, while Pakistan’s women cricket team won the team of the year award.

Sports icon awards were presented to Aisam ul Haq, Hussain Shah, Mohammad Yousuf, Naseem Hameed, Samiullah and Javed Miandad for their achievements in respective categories. Commenting on the awards, the founder and chairman of Pakistan Sports Awards Shoaib Malik said that it was everyone’s duty to acknowledge the services of our athletes and other unsung heroes who have made Pakistan proud.

“It was my dream to honour all these sports-persons who have brought laurels for Pakistan.” the all-rounder said. Ameem ul Haq, the co-founder of the awards, said that it was the first event and is here to stay. He also highlighted that more than 100,000 people voted for different athletes during the online voting window before the awards. “There may be things which we couldn’t do this year, we will do that in next year, making it even bigger,” Haq said.

Musharraf shifted to Dubai hospital after ‘reaction’ from rare disease

Musharraf shifted to Dubai hospital after 'reaction' from rare disease