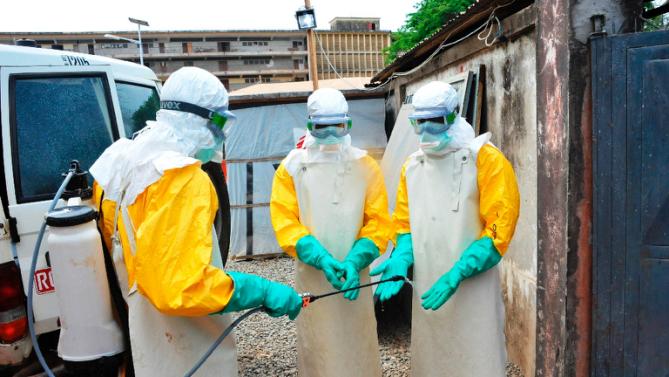 An experimental Ebola vaccine tested on humans in Europe and Africa sparks the production of the antibodies needed to neutralise the deadly virus, a Geneva hospital said Wednesday. There is no licensed treatment or vaccine for Ebola, and the World Health Organization last year endorsed rushing potential ones through trials in a bid to stem the epidemic still simmering in west Africa.

Initial clinical trials of the VSV-ZEBOV candidate vaccine, manufactured by the Public Health Agency of Canada and developed by Merck, show that it “triggers the production of antibodies capable of neutralising the Ebola virus,” the Geneva University Hospitals (HUG) said in a statement. A study of the phase 1 clinical trials on 158 volunteers in Switzerland, Germany, Gabon and Kenya, published in the New England Journal of Medicine, also showed that the even small amounts of the vaccine could be effective. The phase 1 trials are aimed at testing for safety. The study compared the doses tested by the various teams, ranging from 300,000 to 50 million vaccine particles, and found that “even low doses of this experimental vaccine are able to trigger the production of antibodies against the Ebola virus.”

Follow-up analysis six and 12 months after the volunteers took the shot should determine “whether a single injection is enough to induce a lasting immune response” or if booster injections would be needed, HUG said. Since the Ebola outbreak began in Guinea in December 2013, more than 25,000 people in nine countries have been infected with the virus, and over 10,400 of them have died.

All but a handful of those deaths have occurred in Liberia, Sierra Leone and Guinea. HUG stressed Wednesday that phase III clinical trials — aimed at testing for efficacy — underway in Guinea “will determine whether the immune response triggered by this vaccine is able to protect the population against the Ebola virus.” Those trials would also show whether large-scale vaccination campaigns were feasible, it said.

The trials at HUG were briefly suspended late last year after several volunteers experienced unexpected joint pains, but resumed after it cut the doses used. The hospital said Wednesday that VSV-ZEBOV provoked inflammatory reactions like fever and muscle pain in almost all the volunteers, which is common in live vaccines. In one in five volunteers however, the vaccine particles reached joints and caused pain similar to rheumatism for about 10 days, mostly in hands, feet, knees and elbows. Some volunteers also developed rashes for a few weeks, it said. But “not a single volunteer had to miss work or be hospitalised,” HUG said. Another experimental vaccine, ChAd3, made by Britain’s GlaxoSmithKline is also undergoing phase 1 trials in a range of countries and started phase 3 trials in Liberia in February. AFP