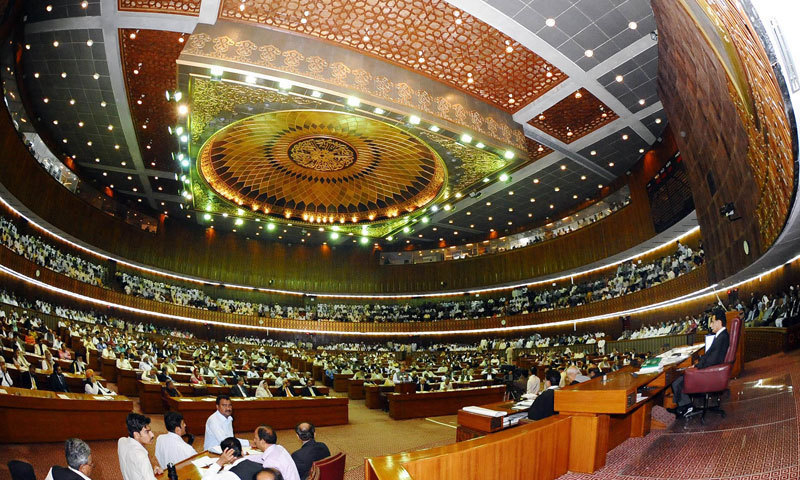 The National Assembly was on Friday assigned to work overtime on Saturday when, according to two ministers, it would receive a government-proposed draft bill to provide for setting up military courts to try terrorism suspects, with a two-year constitutional cover.

The house spent its whole Friday sitting and continuing for the second day a debate on a Dec 16 Taliban terrorist attack on a Peshawar public school which left over 149 students and staff members dead, before being adjourned until 10am on Saturday. Though the purpose of holding a sitting on Saturday — a normally off day in the two-day parliamentary weekend — was not announced on the floor of the house, the Minister of State for Parliamentary affairs, Sheikh Aftab Ahmed, who looks after most of the government’s legislative business these days, told reporters outside the chamber that a government bill on the question of military courts would “come tomorrow”. Inter-Provincial Coordination Minister Riaz Hussain Pirzada also said, in response to some reporters’ questions, that the bill would be presented to the house on Saturday. There was no official word whether the government would seek an immediate passage of the new bill so it could be taken to the Senate on its next working day on Monday or allow it the normal, longer route of being referred to the house standing committee on law and parliamentary affairs before coming back to the house for adoption. Since the bill — called the Constitution (Twenty-second Amendment) Bill — seeks amendments to the Constitution, it must be passed by two-thirds of the total membership in both the 342-seat National Assembly and the 104-seat Senate.

And whereas it is expedient that the said terrorists groups including any such terrorists fighting in the name of religion or sect captured or to be captured in combat with the Armed Forces or otherwise are tried by the courts established under the Acts mentioned hereinafter in section 2;

And whereas the people of Pakistan have expressed their firm resolve through their chosen representatives in the all parties conference held in aftermath of the sad and terrible terrorist attack on the Army Public School at Peshawar on 16 December 2014 to permanently wipe out and eradicate terrorists from Pakistan it is expedient to provide constitutional protection to the necessary measures taken hereunder in the interest of security and integrity of Pakistan;

It is now enacted as under:

(2) It shall come into force at once.

(3) It shall extend to the whole of Pakistan.

(4) The provisions of this Act shall remain in force for a period of two (2) years from the date of its enactment and shall cease to form part of the Constitution and shall stand repealed on the expiration of the said period.

“Provided that the provisions of this Article shall have no application to the trial of persons under any of the Acts mentioned at serial No.6, 7 & 8 of section 3 of this Act who claims or is known to belong to any terrorist group or organisation formed in the name of religion or sect.

Afghan President Says US Might Want to ‘Re-examine’ Pullout Deadline

Afghan President Says US Might Want to 'Re-examine' Pullout Deadline