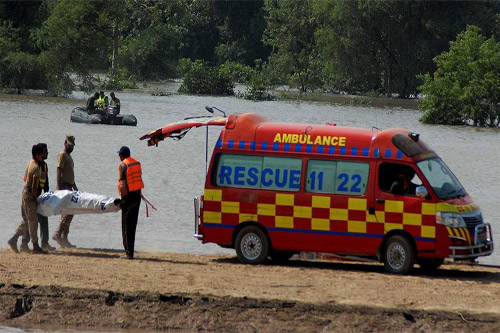 Severe flooding sank a boat carrying a wedding party near Multan in Punjab province on Sunday, killing the bridegroom and 18 others, officials said. Senior police officer Mian Tanvir said the army-run boat carrying over 30 people capsized when it hit debris from a dyke that had been blown up earlier in the day to divert waters away from urban areas.

“Divers are searching for the remainders,” he said, adding that 18 passengers had been rescued. The army later said in a statement that an officer had drowned while helping in rescue efforts. Local television channels showed footage of emergency workers and the wailing father of the bridegroom. The bride was among the rescued. “We were many people in the boat and water started seeping in and eventually it overturned,” she told a reporter from a local television channel, which did not give her name. “I don’t know who survived and who we lost.” Separately, three people drowned in the area overnight, senior provincial rescue official Ali Imam Syed said. The deaths, combined with those from the boat tragedy, brought the overall death toll from flooding in Pakistan to 301, he added.

Military specialists blew up dikes in central Pakistan to divert swollen rivers and save cities from raging floods that have killed hundreds of people, authorities said Saturday. The breaches at the overflowing Chenab River were performed overnight as floodwaters reached Multan. News channels showed pictures of floodwaters gushing through the blown-up dikes. Civil and military officials have been using helicopters and boats to evacuate marooned people since Sept. 3, when floods triggered by monsoon rains hit Pakistan and Kashmir.   The military said in a statement Saturday that it was still evacuating people and air-dropping food in the districts of Multan, Muzaffargarh and Jhang.[contentblock id=2 img=adsense.png]

It said troops had air-dropped tons of food in flood-affected areas, while the army’s medical teams were also treating patients. In a fresh statement issued Sunday, the ISPR said rescue and relief operations are ongoing in Multan, Muzaffargarh, Uchsharif, Bahawalpur and Athara Hazari. It also said more than 37,000 people have been rescued by army troops. Ahmad Kamal, the spokesman for the National Disaster Management authority, said rains and floods had killed 280 people and injured more than 500 in Pakistan and Azad Jammu and Kashmir. He said more than 2 million people had been affected. Kamal said rescuers had evacuated 276,681 persons from flood-hit areas and aerial monitoring was being done through helicopters.

On Saturday, PTV showed pictures of men and women wading through waist-deep waters. It also showed army helicopters plucking people from rooftops and trees in inundated villages. Pictures taken from helicopters showed submerged villages and towns in the districts of Jhang and Multan. Prime Minister Nawaz Sharif, who is himself supervising rescue operations, traveled to Jhang on Saturday. In a televised speech there, Sharif said his government was exempting flood-affected people from paying their electricity bills.

“I assure you that we will rebuild your homes. We will do whatever is possible to help you,” he told a gathering of survivors near a flooded village.