Zarb-e-Azb: Over 900 Terrorists Killed So Far 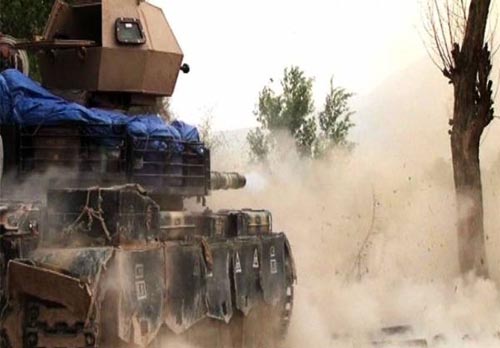 Zarb-e-Azb: Over 900 terrorists killed so far

Around 910 terrorists have been killed in the ongoing operation by Pakistan armed forces against militants in restive tribal North Waziristan agency. According to a statement issued by the ISPR, since the start of Zarb-e-Azb operation in mid June 82 soldiers embraced martyrdom and 269 were injured in the entire country while fighting against terrorism.

The statement said that 88 kilometers long road, Khajuri-Mirali-Miranshah-Dattakhel and Road Ghariom-Jhallar have been cleared. So far security forces have cleared major towns of Miranshah, Mirali, Datta Khel, Boya and Degan, which were considered strong holds of terrorists, it said adding as many as 27 IEDs factories, one rocket and ammunition factory each have been recovered and destroyed. The ISPR said that huge cache of arms and ammunition, communication equipment, and other logistics facilities, used by terrorists have been destroyed uprooting their ability to attack as a coherent force.

“2274 intelligence led coordinated counter terrorism operations across the country have been carried out throughout the country to forestall any blow back of operation. 42 terrorists have been killed and apprehended 114 hardcore terrorists in these operations,” it said The statement said that since the start of operation 82 soldiers have embraced ‘shahadat’ in entire country while fighting against terrorism while 269 are injured. The details of 82 martyred soldiers include, 42 in North Waziristan Agency, 23 in rest of FATA other than North Waziristan Agency and 17 in remaining parts of the country including Balochistan and Karachi.

The ISPR said that relief operation for temporarily dislocated people of North Waziristan Agency, continues to help our brethren from North Waziristan   with full zest and zeal “19376 tons rations have been distributed among 97570 TDPs families at 6  relief delivery points so far at Bannu,DI khan and Tank,” the statement said, adding 113209 patients including 32979 females have been treated at field medical hospital established by Army medical Corps at Khalifa Gul Nawaz hospital Bannu.  Around 32226 cattle have been treated so far where as 73338 cattle and 129141 poultry vaccinated up till now, the statement said. – Samaa