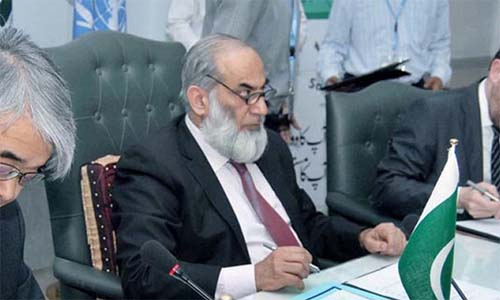 A retired judge from Sindh on Tuesday endorsed an earlier claim that the judiciary ignored the Election Commission while making appointing to election tribunals. Syed Ali Mohammed Rizvi, who was a Sessions Judge in Sindh and retired in 2002, claimed that the former Chief Election Commissioner (CEC) Fakhruddin G. Ibrahim had interviewed him and two other retired judges for appointment in provincial election tribunals.

Mr Rizvi told a briefing in Washington that after the interview, the CEC made a list of three retired judges for appointment but the former Chief Justice Sindh High, Justice Mushir Alam, prevented him from doing so. Instead, the former chief justice of Sindh appointed three other retired judges for the tribunals. Justice Alam also advised the CEC that the judiciary, not the Election Commission, would make all appointments. All three judges were in grade 21 but were appointed in grade 22.

Mr Rizvi’s statement endorses the claim of the former Additional Secretary of the Election Commission Mohammed Afzal Khan that the judiciary prevented the commission from performing its duties. Mr Rizvi said he only wanted to bring out the facts and did not favour either side in the dispute between the government and the protesters. He said he believed it was wrong to bring a crowd and force the government to step down. “We are not living in the mediaeval age when such things happened.” -dawn