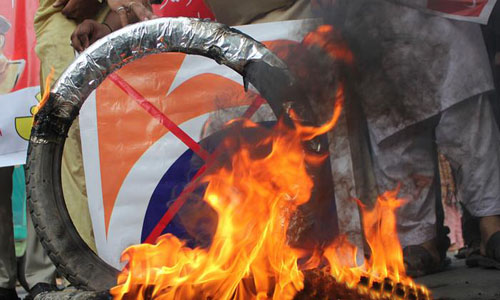 A Pakistani television channel is suing the powerful spy agency for defamation over accusations of being anti-state, it said on Friday, in a move unprecedented in a country where public criticism of the military is taboo. Geo News, part of the privately owned Jang Group, has also given the ISI spy agency 14 days to issue a public apology.

“Geo and Jang Group (have) served a legal notice on the Ministry of Defence, Inter-Services Intelligence (ISI) and Pakistan Electronic Media Regulatory Authority for defaming and maligning the group,” the channel said in a report published in a newspaper owned by the media house. “More than 8,000 journalists, workers and professionals attached to the group and their families are not only being harassed but also attacked and tortured across Pakistan.” In April, Pakistan’s Defence Ministry had demanded that the licence of Geo News be suspended after it reported that the ISI was behind the shooting of one of Pakistan’s most famous journalists. Since the dispute began, Geo News has been taken off the air in several parts of the country or been moved to obscure slots on the channel lineup by the cable operators, allegedly under pressure from the military, according to the lawsuit.

Distribution of the parent group’s newspapers has also been disrupted. Last month, the channel apologized for the allegations in an attempt to resolve an issue that has added to tensions between the civilian government of Prime Minister Nawaz Sharif  and the all-powerful military. But temperatures have failed to cool and in a lawsuit the channel has now asked the powerful spy agency to retract its defamatory statements, publicly apologise and pay $500 million in damages. A spokesman for the military was not immediately available for comment. April’s shooting of Hamid Mir, a journalist anchoring Pakistan’s top political news talk show, sent a chill through the journalism community weeks after television anchor Raza Rumi was attacked in the city of Lahore. Rumi survived but his driver was shot dead.

Although Pakistani media have become increasingly vibrant in recent years, with stories exposing corruption or injustices appearing frequently on the pages of the country’s many dailies, public criticism of the army or the ISI is largely taboo. No one has claimed responsibility for the recent assaults, although the Taliban, holed up in mountains on the Afghan border, have made repeated threats against domestic and foreign reporters for portraying the insurgency in a negative light. –pakistanaffairs