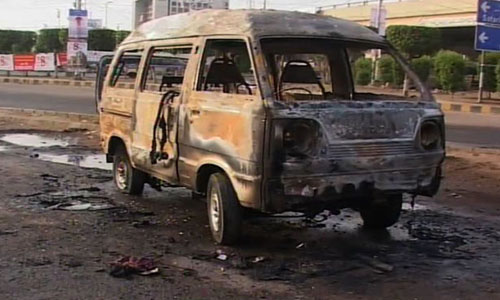 Vehicles of the Jang group continue to be targeted across Pakistan. In the latest attack a vehicle carrying the group’s newspapers was first hijacked and later burnt in Rawalpindi.

The incident took place at 2:00 AM on Murree Road. The attackers hijacked the vehicle and the driver was assaulted. According to the driver Muhammad Razzaq he was delivering newspapers to Islamabad when his vehicle was stopped by four armed men. Razzaq said he was blindfolded and was told he would not be allowed to deliver the papers. After being assaulted, Razzaq was left on the roadside.

The driver reached the Jang building in Rawalpindi and the hijacked vehicle was recovered at 9:00 AM. The attackers had set the vehicle and newspapers on fire. The newspapers were reprinted and sent for delivery. This is the latest in a series of attacks targeting Jang group newspaper delivery vehicles. On May 25 a vehicle was attacked in Lahore. Attacks have also taken place in Karachi and Rawalpindi. -thenews