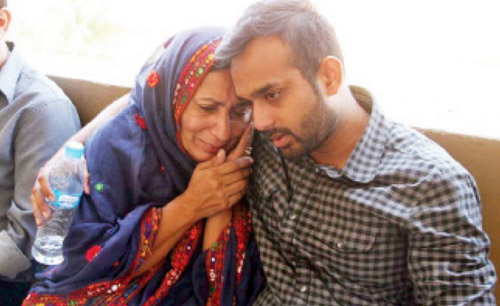 Police investigators have decided to move an application in court to conduct the identification parade of the key accused in the murder of Sulaiman Lashari inside the hospital where he is currently under treatment.

An O’ Levels student, Sulaiman Lashari, was gunned down at his house in Defence Housing Authority on May 8. He was allegedly killed by the main accused in the case, Salman Abro, who is the son of Sakrand Police Training Centre SSP Ghulam Sarwar Abro. The four police personnel who had accompanied Salman have already been arrested while the police have yet to arrest Salman as he is still in the hospital. The victim’s family had correctly identified the four accused personnel during an identification parade in front of a magistrate on Monday.

“The decision to conduct the identification parade at the hospital was taken in view of his condition,” said a source privy to the matter. He added that police have also obtained the call records of eight persons, including the deceased and the accused. The vehicle, a Vigo, used in the incident was neither registered in the name of the key accused nor in the name of his father, SSP Abro. Meanwhile, the victim’s family has expressed their reservations regarding the police investigations. “We are waiting for justice through the legal way, otherwise we know how to deal with such cases,” Sulaiman’s brother, Zeeshan.

“The call records are irrelevant,” he stressed. “It does not matter whether they were friends or not. What is important is that Salman Abro killed my brother.” No inquiry is being conducted against SSP Abro for abusing his powers. The SSP admitted that no one had approached him for an inquiry. “I don’t know if there is an inquiry against me as no one contacted me regarding it,” he told The Express Tribune. “There is no justice in the department so I have decided to resign from the force.”

SSP Abro criticised the investigation officers for not taking the case seriously. “Why have they not arrested or interrogated the two teens’ friends?” he questioned. He warned that he was preparing to take the matter to court with concrete evidence. Almost a week has passed since the incident but the investigators have still been unable to ascertain the actual motive behind the incident. This was the third such incident to have occurred in the DHA. Interestingly, the same investigation team has been appointed to investigate all three cases. Their efforts, or lack thereof, have been questionable at best.

In the Shahzeb Khan murder case, Shahrukh Jatoi had been declared under 18 years of age by the medical board, allegedly after the board was influenced by the investigators to do so. The report of the ossification test was rejected by the trial court after the then chief justice Iftikhar Chaudhry noted that efforts were being made to save him from punishment by declaring him a minor. In the Hamza murder case, charges have still not been framed while the key accused is still absconding and the co-accused has already been released on bail. The police investigators, particularly Inspector Muhammad Mobin, declined to comment despite repeated attempts to contact them. -tribune

Dollar Weakens Further As Eyes Turn to US, Europe data

Google Nexus 6 Getting ready to roar

Google Nexus 6 Getting ready to roar