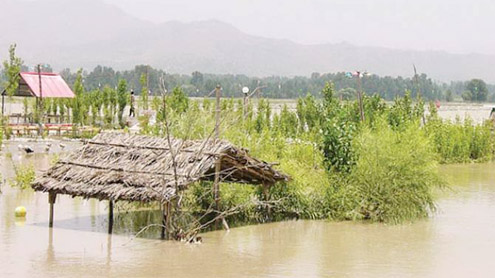 SWAT: With the start of snow melting at the Upper Swat Mountains, the water level in River Swat rose to dangerous level spreading fears of flood in the area.

According to details, the rise of water to dangerous level in the river posed a great threat to the population living near the bank of river.The river has claimed several precious lives in the current summer season as the untoward incident happened when tourists totally unaware of the ferocity of river waves are strolling at its bank to enjoy the beauty of nature.A few days back, a tourists family came from lower region of the country to get some respite from the scorching heat to the scenic valley. They were sitting on the bank of river when a speeding wave swept them away, killing a child and injuring his father and mother critically at the Fizaghat area.

The vigorous flow of water might turn into flood, which would definitely effect the population of Fizaghat area.Recently new water walls were made to block the flow of water but it would not give protection to the area’s population from floods. Fear once again griped the local population when they heard about the news that the threat of flood is looming large. As a result a large number of people, who were living near the riverbank, vacated their houses and moved to safer places.

The local people themselves conducted relief operations in the area to protect their homes from water but the authorities responsible to protect citizen from natural disasters did not pay any attention to their problem.The inhabitants of the area demanded the KPK government to take cognisance of the situation and act timely to protect residents of the area from the flood.

Staff Reporter from Peshawar adds: At the start of 2013-Flood Season, the Flood Emergency Cell has been established at the Office of Executive Engineer Hydrology Irrigation Division, Peshawar, which would start functioning on round-the-clock basis.Inayatullah Wazir, Executive Engineer (Hydrology) has already been nominated as focal person in connection with the flood duties/reporting for flood season 2013.The Flood Emergency Cell obtains information from the different gauge stations of Khyber Pakhtunkhwa. The data primarily relates to the river flows/discharges at critical stations and other important control points.

he duty official would be available at telephone NO. 091-9212114/091-9211907 for 24-hours, including closed holidays for the entire monsoon season 2013. Information desired by any ministry/division/department with regard to river flow data can be obtained from the above telephone numbers. Following officers would also be available for contact. Inayatyullah Wazir XEN, Hydrology(focal Person)-03459220897, Sohail Khan SDO Hydrology (Liaison Officer)-03329999191 and Muniruddin Draftsman (Supervisor)-0321-9018977. – Nation