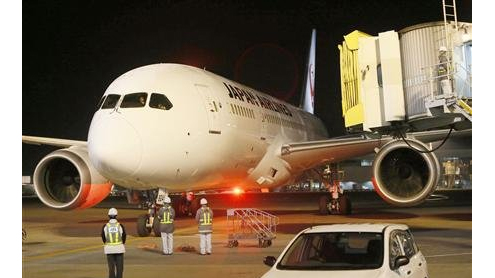 NEW YORK/TOKYO: Boeing Co’s 787 Dreamliner jet suffered a third mishap in as many days on Wednesday, heightening safety concerns after a string of setbacks for the new aircraft.

Japan’s All Nippon Airways said it was forced to cancel a 787 Dreamliner flight scheduled to from fly from Yamaguchi prefecture in western Japan to Tokyo due to brake problems.That followed a fuel leak on Tuesday that forced a 787 operated by Japan Airlines to cancel take-off at Boston’s Logan International Airport, a day after an electrical fire on another 787 after a JAL flight to Boston from Tokyo.Asian customers rallied behind the U.S. planemaker, however, saying such teething troubles were not uncommon on new planes and confirming they had no plans to scale back or cancel orders for the aircraft, which has a list price of $207 million.

Japan is by far the biggest customer for the Dreamliner to date, with JAL and All Nippon Airways (ANA) operating a total of 24 of the 49 new planes delivered to end-December. The aircraft entered commercial service in November 2011, more than three years behind schedule after a series of production delays. Boeing has sold 848 of the planes.JAL spokesman Kazunori Kidosaki said the carrier, which operates seven Dreamliners, had no plans to change orders it has placed for another 38 aircraft. ANA, which has 17 Dreamliners flying its colors, will also stick with its orders for another 49, spokesman Etsuya Uchiyama said.

State-owned Air India, which on Monday took delivery of the sixth of the 27 Dreamliners it has ordered, said precautionary measures were already in place and its planes were flying smoothly. “It’s a new plane, and some minor glitches do happen. It’s not a cause of concern,” said spokesman G.Prasada Rao.There was no immediate suggestion that the 787 Dreamliner, the world’s first passenger jet built mainly from carbon-plastic lightweight materials to save fuel, was likely to be grounded as investigators looked into the fire incident.

Air China, which sees the 787 as a way to expand its international routes, and Hainan Airlines also said they were keeping their orders for 15 and 10 of the planes.”New airplanes more or less will need adjustments, and currently we have no plans to swap or cancel orders,” said an executive at future 787 operator Hainan Airlines, who was not authorized to talk to the media and did not want to be named.Qatar Airways Chief Executive Akbar Al Baker, who has previously criticized technical problems or delays with Boeing or Airbus jets, said there were no technical problems with the five 787s currently in use by the Gulf carrier.”It doesn’t mean we are going to cancel our orders. It’s a revolutionary airplane,” he said.Other carriers already flying the Dreamliner are Ethiopian Airlines, LAN Airlines, LOT Polish Airlines and United Airlines.

The fuel leak on Tuesday was noticed at about 12:25 p.m. ET (1725 GMT) after the plane had left the gate in preparation for take-off to Tokyo. About 40 gallons spilled, and the jet was towed back to the gate, where passengers disembarked, said Richard Walsh, a spokesman for the transportation authority.The plane departed about four hours behind schedule and was due to arrive in Tokyo on Wednesday evening.No passengers or crew were injured in either incident, though firefighters were called out on both occasions.

Boeing shares fell nearly 2.7 percent on Tuesday, following a 2 percent drop on Monday – wiping around $2.8 billion off its market value, or more than a dozen Dreamliners at list price.While many Wall Street analysts rate Boeing stock a ‘buy’ or ‘outperform’ – the manufacturer has delivered jets faster than the market predicted – some noted the potential for the combination of a fire and a fuel leak to affect public perception of Boeing and the new aircraft.

People working at OG Travel and Eurex, travel agents in Tokyo, said they had not seen any impact on reservations on flights using the 787 aircraft. “I’ve not heard of any cancellations following these incidents,” Eurex staffer Yasuhiro Hirashiki told Reuters.Carter Leake, an analyst at BB&T Capital Markets in Virginia, downgraded Boeing shares, noting that fires are potentially lethal and electrical issues are tough to solve, though he and others stopped short of calling it a game changer for the Seattle-based manufacturer.

“We’re getting to a tipping point where they go from needing to rectify problems to doing major damage control to the image of the company and the plane,” said Richard Aboulafia, a defense and aerospace analyst with Teal Group, a consulting firm based in Fairfax, Virginia.”While they delivered a large and unexpected number of 787s last year, it’s possible that they should have instead focused on identifying glitches and flaws, rather than pushing ahead with volume production,” he said.

Monday’s fire occurred on a 787 plane that had just arrived from Tokyo and whose 183 passengers and crew had disembarked.The National Transportation Safety Board said on Tuesday a battery in the auxiliary power unit aboard the plane jet had suffered “severe fire damage” and that surrounding damage was limited to components and structures within about 20 inches. It said the power unit was operating when the fire was discovered.

Shares in GS Yuasa Corp, the Japanese firm that makes the Dreamliner batteries, fell around 5 percent in Tokyo on Wednesday after dropping 4 percent a day earlier.Boeing said it was cooperating with the investigations, but it would be premature to go into detail.”However, nothing we’ve seen in this case indicates a relationship to any previous 787 power system events, which involved power panel faults elsewhere in the aft electrical equipment bay (where the fire occurred),” the company said.

The Wall Street Journal, citing a source, reported that United Airlines found improperly installed wiring in 787 electrical components associated with the auxiliary power unit, the same electrical system that caused Monday’s fire.United spokeswoman Christen David said the carrier inspected its 787s after the Boston fire, but she declined to discuss the findings, or to confirm the Journal report.

The Federal Aviation Administration last month ordered all 787s to be inspected after fuel leaks were found on two aircraft, due, it said, to incorrectly assembled fuel line couplings that could result in power loss or an engine fire.Mechanical problems are not uncommon when new planes enter service and they often disrupt airline schedules, experts said.

“I think we’re dealing here with a situation where this aircraft is over-scrutinized for a number of reasons, including the birth difficulties,” said Michel Merluzeau, managing partner at defense and aerospace consulting firm G2 Solutions.”Don’t get me wrong. A battery fire is a very, very serious event. Especially a lithium-ion battery,” he added. “And we don’t know what the problem is. But the 787s is still a very safe aircraft to fly.” – YahooNews