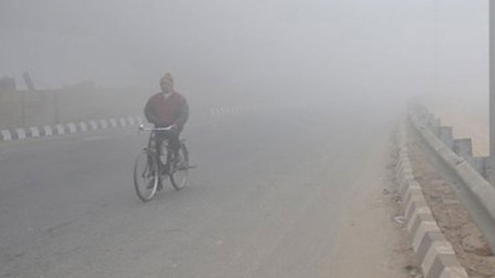 RAWALPINDI/ISLAMABAD: Dense fog gripped the twin cities on Wednesday, which disrupted train and flight schedules, besides causing inconvenience to the commuters.

The fog has been enveloping the twin cities from 9:00pm to 8:00 am for last two days. The intensity of the fog is the highest as compared with that observed in the last 10 years. Met Office predicted that current foggy and cold weather conditions prevailing in plains of Punjab since last few days were likely to continue for next few days and the intensity and extent of fog would increase during coming three days.

Unfortunately, City Traffic Police (CTP) or any other authority concerned has not yet issued any advisory for the vehicle owners as to what kind of precautionary measures they should adopt during fog.The weather in most parts of the division remained cold and dry as fog enveloped 16 km long Adyala Road, GT Road from Katcheri to Jhelum and many areas of Peshawar Road. According to a survey, conducted by this scribe in different areas of the cantonment city on Tuesday night, the visibility dropped to 10 meters on Adyala Road, Soan Bridge, Behria Town, Rawat and Gujar Khan. No traffic police official was present on the road to guide the traffic which moving at snail pace with glittering double indicator.

Mohin Khan, a driver was heading towards Adyala Jail in his pickup at 11:30pm on Tuesday but parked his vehicle along with road because of fog, told this scribe that it has become very difficult for him to continue the journey in fog. “I started my journey from Katcheri Chowk at 10:00pm for Rawat in my car; however, the fog at Soan Bridge forced me to stop my car at roadside. It’s too difficult to continue drive in dense fog, Shabbir Khan, a businessman told this scribe at Soan Bridge. Fog became denser around 2:00 am, when the visibility on many roads also dropped to 5 meters. The visibility on GT Road was zero till 6am.When contacted, Divisional Superintendent (DS) Pakistan Railways Syed Munawar Shah said that the continuous fog causing delay up to 25 minutes in rail schedule playing between Rawalpindi and Lahore.

He said that the fog was very thick between Saraialamgir to Kharian because of Jhelum river where trains stayed for 8 to 10 minutes. He said that trains were reaching Lahore with the delay of 15 to 25 minutes because of thick fog at Chinab and Ravi rivers. Met Office Director General (DG) Dr Hanif predicted that current foggy and cold weather conditions prevailing in plains of Punjab since last few days were likely to continue for next few days and the intensity and extent of fog would increase during coming three days. The coverage of fog would also extend towards the plain areas of KPK (Peshawar and D.I. Khan Divisions) and Upper Sindh (Sukkur and Larkana diviosions). The duration of fog in parts of the Punjab (Lahore, Gujranwala, Faisalabad and Sahiwal divisions) would be 16 to 20 hours daily during the said period.

He said that the day temperatures in plain areas of Punjab would remain significantly below normal causing severe cold wave conditions. The prevailing cold wave conditions in Baluchistan, Upper parts of KPK and Gilgit-Baltistan were also likely to continue during next 3-4 days, he added.Dr Hanif further predicted that the prevailing foggy conditions would subside after a good spell of winter rains which is expected during 2nd and 3rd week of the current month.

Agencies add: Thick fog has gripped the twin cities of Rawalpindi and Islamabad and its intensity is the highest as compared with that observed in the last 10 years.Due to this the airport has been closed for all types of air traffic.  According to Civil Aviation Authority officials, due to the closure of the airport, 11 flights were diverted to Lahore Airport, while five flights were cancelled. The airport was reopened in the day after fog cleared but several flights were delayed causing inconvenience to the passengers.