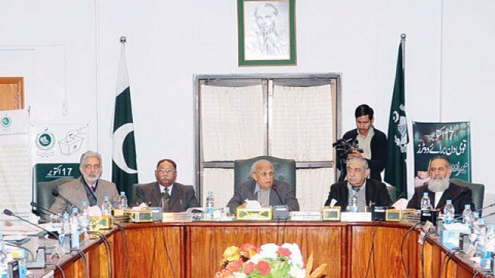 ISLAMABAD: The election commission on Wednesday finalised its plan for upcoming general elections and announced to go ahead with delimitation of constituencies in Karachi.

With the exception to the North Waziristan Agency, the elections would be held across the whole country and would not be delayed anywhere. Military and paramilitary troops would not be deployed only at those polling stations that would be marked as sensitive.These decisions followed a top-level meeting of ECP officials with top officials of federal and provincial governments which was held to formulate the ‘master plan’ regarding administrative and security protocols for the elections.

The international observers would not be allowed to stay for more than a week to monitor elections arrangements (till the elections day), Election Commission of Pakistan (ECP) Secretary Ishtiak Ahmed Khan told journalists during an in-camera briefing on the meeting.Ban on the issuance of arms licences at federal and provincial levels of both the prohibited and non-prohibited bore weapons becomes effective from today (Thursday) till the conduct of the general elections, the ECP secretary said.

Chaired by Chief Election Commissioner (CEC) Justice (r) Fakhruddin G Ebrahim, the meeting was attended by ECP officials and secretaries of defence, interior, foreign affairs and Safron (States and Frontier Regions) as well as the chief secretaries, home secretaries and the inspector generals (police) of all the four provinces. Heads of the Frontier Corps and Pakistan Rangers were also present.Detaching from chief election commissioner’s ‘personal opinion’ reflective of an apparent U-turn on the issue of delimitation of constituencies in Karachi, the commission announced to continue the delimitation drive in the light of the Supreme Court orders.“The CEC statement on the delimitation issue is his personal opinion.

That’s not the official line of the ECP. We’re carrying out constituencies delimitation in Karachi as ordered by the Supreme Court of Pakistan,” Ishtiak Ahmed responded to a query. The ECP has already decided to conduct constituencies’ delimitation in the December 13 meeting and it is going by its decision, he said.On December 26 the last, the CEC had disclosed to the media that he ‘personally’ opposed the delimitation of constituencies in Karachi. This ‘revelation’ stirred enormous criticism in the media as the commission had earlier reiterated to follow the SC ruling issued on November 28 last year in letter and spirit.

The ECP secretary did not respond to another query regarding Dr Tahirul Qadri’s newly discovered ‘resolve’ to get the general elections postponed to ‘overhaul’ the system through electoral reforms but added that the reforms could not be done overnight. “I can’t comment on his plans. The electoral reforms cannot be done overnight or in days. They take years,” he said.During Wednesday’s meeting, the CEC Fakhruddin said that the ECP wanted deployment of troops at all the polling stations across the country.

No polling station would be set up in North Waziristan Agency (NWA) where the polls would not be held reportedly due to the ongoing military crackdowns while polling stations would be set up in the remaining parts of Fata, including South Waziristan.But this exclusion of North Waziristan form the election process has given rise to prospects of a full fledged and declared military offense there in near future. The Army on Wednesday also published its new ‘Army Doctrine’ declaring the internal threats emanating from terrorism as main focus of its future operations.

The Wednesday’s meeting also decided that international observers would not be issued visas for more than a week for their stay in Pakistan to monitor the elections. To be headed by the foreign secretary, a committee would be formed to deal with the matter.Travel restrictions would be imposed on Afghan immigrants two weeks ahead of the polls due to security reasons. The internally displaced persons (IDPs) would be registered as voters in the camps they are staying in, and the polling stations would be set up accordingly.

A district election security committee (DESC) would be set up in each district throughout Pakistan to oversee security arrangements. To be led by a district returning officer (DRO), the committee would include district police officers (DPOs), district coordination officers (DCOs) and other civil administration officials.In Fata, the political agents and assistant political agents would be the members of the DESCs. The committees would work in coordination with the provincial election commissions (PECs) during and ahead of the elections.

The provinces would install CCTV cameras at the sensitive polling stations.As many as 700,000 employees of federal and provincial governments would be assigned election duties while 500 monitoring teams would be formed. The polling officers would be given enhanced magistracy powers under Section 30 of the CRPC. A polling officer would be informed about his/her appointment only a day prior to the elections.The female polling staff would be assigned duties near their home stations. Every electoral candidate would be allowed to keep not more than five security guards. The display of weapons by candidates or their supporters would be banned after the announcement of election schedule. Ishtiak Khan said that a proposal to enforce strict rules for public processions after polls’ announcement was being considered by a Senate committee. – Nation