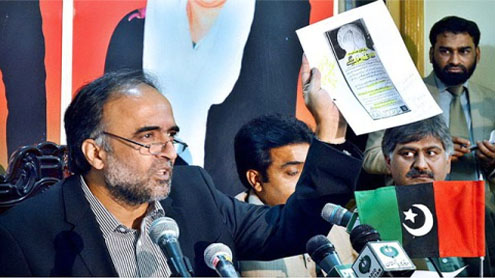 ISLAMABAD: Ruling PPP’s Qamar Zaman Kaira, the minister for information and broadcasting, on Tuesday called on the PML-N to apologise to the public and the President of Pakistan for the ‘ugly role’ it played in stealing the public mandate in the 1990 general elections.

“The history has divulged the truth that the people’s mandate had been stolen. But on the other side, the ‘sinners’ are branding it as propaganda,” Kaira said referring to PML-N chief Nawaz Sharif’s Monday statement in which he had said the people would not be influenced by the propaganda against his party.Addressing a press conference at the PPP Central Secretariat here, an emotional Kaira said that PPP’s opponents always came to power through conspiracies, but their efforts to erase it from the hearts of the masses proved futile altogether.

According to the minister, the 1988 elections were also rigged (by the agencies), but the PPP still managed to win majority of seats. He remarked that everybody knew how General Gilani made Nawaz Sharif chief minister.Kaira tapped into the history, recalling that the Islami Jamhoori Ittehad (IJI) was founded in 1986, when Benazir Bhutto touched down in Pakistan. “It (the IJT) was an attempt to gather like-minded people by an Army-led cell and was formally launched by General Hameed Gul after the death of Ziaul Haq.”

“The apex court verdict (in the Asghar Khan case) has exposed how Chaudhry Nisar’s cronies rigged elections in the past,” Kaira said. “What has been depicted from the ruling is just a small chapter of a condemnable propaganda, as various other characters and their wrongdoings are yet to be exposed.”He said, “Although the verdict has proved the robbery of people’s mandate, the status of the government formed on the basis of that rigging is yet to be decided.”

The minister told the media that some people were demanding a UN investigation, while others were not ready to accept an investigation through the FIA. “It is the court, not the government, which wants to put the FIA in charge of the investigation.”“Today, the doors for poll rigging have been closed and no one can win elections on the basis of false propaganda and support from the agencies.” Kaira claimed that N-League’s historic triumph of the 1996 elections was also due to rigging, and promised to come up with proofs to expose PML-N’s mandate in 1996. He also recalled that the agencies had threatened Benazir Bhutto that her jailed husband would be killed if she refused to accept the then government.

The minister said the court verdict had vindicated Benazir Bhutto in her grave as all her statements, including the formation of a government by stealing the public mandate, had proven true today.He asserted that while political adversaries came to power using propaganda and unconstitutional tactics, the PPP always banked on the people’s mandate despite all conspiracies.Kaira further said Ishaq Khan had toppled the Benazir government and his action was ratified by the then Lahore High Court chief justice Rafiq Tarrar, who in return was later made the country’s president.

The minister quoted news items of the 1990s containing BB’s statements on the establishment of a cell in the Presidency to rig the polls and IJI’s victory on 105 seats, several of them with 100 per cent turnout, proved that fact.Kaira mentioned a white paper issued by Benazir Bhutto regarding the tactics used for rigging the polls, and clarified that the PPP had nothing to do with Asghar Khan’s petition as it was moved after the elections were lost.In 1990, some bogus outfits, such as Tehrik-e-Naujawanan-e-Pakistan, Tehrik-e-Islah-i-Muaashra, Pakistan Voters Forum and Tehrik-e-Istihkam-e-Pakistan, were formed to help rig the elections.

The PPP, the minister said, had tendered an apology to the people for the mistakes it did not commit. “We apologised to the people of Balochistan for the mistakes of others.”The minister expressed surprise over the statement of PML-N leader Nawaz Sharif and others demanding establishment of a commission or investigations by the United Nations.To a question, he said that action against elements involved in misusing the public money would be taken according to the Constitution and law.

About Younis Habib, he said that Nawaz Sharif had granted him a licence of Mehran Bank as a gift to hatch a conspiracy against the PPP. He regretted that the government, formed as a consequence of the rigged elections, instituted cases against BB and Asif Ali Zardari.Kaira, to another query, replied that the president was neutral and it was not fair to expect him to be a completely non-political entity.

“The president is a part of Parliament, which is the product of political and democratic process,” he said, and advised the PML-N to respect the office of president.Kaira also said that even the PPP prime minister was also neutral in his approach, as the government released funds to opposition MPs on an equal basis, besides giving them full respect. – Nation