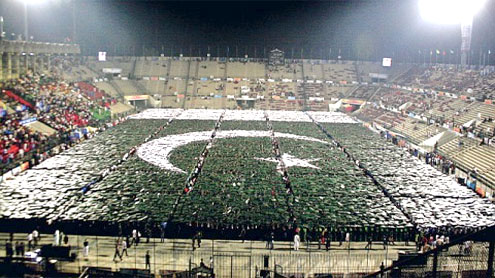 LAHORE: Pakistani youngsters from Punjab on Monday gathered at the National Hockey Stadium to form the world’s largest human flag and marked the day as an effort to show the peaceful image of their country to the world.

“The youth of Punjab ‘touched the sky’ with their efforts; they have been working day in and day out to enter the GWR books and I hope this will be written in golden words,” he added.Besides the largest human flag, Pakistani youth broke another world record by making the world’s biggest mosaic display when 1,936 students participated in making the largest mosaic. The students assembled in a way that they had created the picture of the Lahore Fort.

After observing the attempt from different angles and heights, the Guinness World Record adjudicator declared it another Guinness record.“What an incredible painting it was. In all 1,936 people holding up this beautiful painting and I am happy to announce this, another Guinness World Record for Pakistan,” said Deaves.Meanwhile, Ahmed Amin Bodla broke the 12 kicks shot of the world record created by an American, Meza.

The participants said that despite Pakistan is going through some hard times, their unity would show the world that no one should underestimate Pakistan’s resilience which relies on unity, faith and discipline.They said they tried to build a softer image of Pakistan to the world, hoping that their efforts would be recognise by the international community.Pakistanis formed the world’s largest human flag to demonstrate that the nation is united under crisis and ready to steer the country out of crisis, the students said.

Addressing the youth, Hamza Shahbaz said: “You have made Pakistan proud by making the world’s biggest human flag. I cordially congratulate you for showing the world that your spirit cannot be broken. It is now clear that the youth will make Pakistan the country dreamt by our great leader Quaid-e-Azam Muhammad Ali Jinnah.”Pakistani youth break largest human flag, mosaic records – Nation