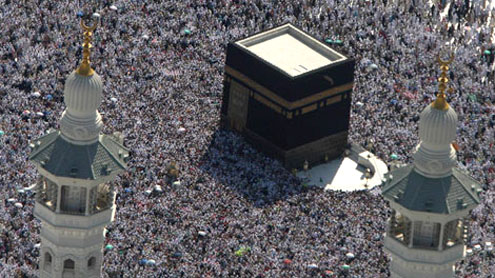 MECCA: Pilgrims in Mecca are set to begin annual Haj rituals on Wednesday. Last year nearly 3 million pilgrims performed the Haj, with roughly a third from inside the conservative kingdom.

The Saudi authorities said there have so far been 1.7 million arrivals from abroad and about 200,000 from inside Saudi Arabia.The Grand Mosque, the focal point of the Islamic faith, is already teeming with joyful pilgrims at dawn on Monday, wearing the simple white folds of cloth prescribed for Haj, many of them having slept on the white marble paving outside. “I feel proud to be here because it’s a visual message that Muslims are united. People speaking in all kind of languages pray to the one God,” said Fahmi Mohammed al-Nemr, 52, from Egypt.

Haj must be performed at least once in lifetime by all Muslims capable of making the expensive, difficult journey, a duty that applies equally to all Muslims.  Mecca’s merchants, famed across the Arab world, are already doing a thriving trade as pilgrims stock up on souvenirs such as prayer beads and mats, Holy Qurans, dates, gold and Zamzam water, pumped from the holy well.

Wednesday is the first official day of the pilgrimage, with Muslims following a set form of rites laid out by the Prophet (PBUH) and culminating on Friday with the Feast of the Sacrifice, Eid al-Adha, a holiday across the Islamic world.”I would love to live here for the rest of my life. There’s no such place in the entire world. This is a blessed country,” said Ziad Adam, 23, a theology student from Kenya.

Saudi Arabia’s king is formally titled Custodian of the Two Holy Mosques and the ruling family has long based its claims to reign on its guardianship of Islam’s birthplace.Over the past decade it has spent billions of dollars expanding the Grand Mosque and building new infrastructure to avert the stampedes and tent fires. – Nation