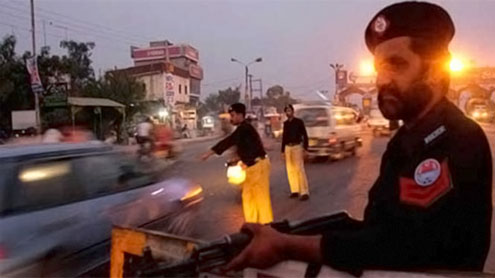 KARACHI: Different incidents of violence during the past 24 hours claimed 19 lives in Karachi whereas security personnel arrested 40 suspects during a targeted operation in the city’s Gulbahar and Surjani town areas, Media reported on Thursday.

In the latest incident of firing one person was killed in Orangi Town number 11-1/2 area near Khalil market in Karachi.Two persons were killed in a targeted attack in Karachi’s Buffer Zone and Aisha Manzil areas.Incidents of firing claimed a life each in the city’s  Malir, Baldia Town,Buffer Zone, Landhi, Dalmia, Korangi Industrial Area, and Garden area, where as two people died of gunshot wounds in  Lee market area of the city.

A bullet-ridden body was found in Karachi’s Defense area whereas a trussed up body was found in Lyari area of the city.Another two people died of gunshot wounds in Surjani Town area whereas another incident of  firing claimed one life  and wounded two others in New Karachi’s sector 11-E area near ‘Budh bazaar’ (Wednesday market).Unknown gunmen opened indiscriminate firing at a hotel in Karachi’s  Gulbahar area in Golimar, killing two persons and injuring two others.

Fear and panic gripped the area as shops and markets shut down in the vicinity.Furthermore, police and rangers conducted a search operation in Gulbahar and Surjani Town areas, arresting 40 suspects.Security personnel conducted a house to house search as a heavy contingent of police  cordoned off the areas, sealing all entry and exit points, during the targeted operation.No arms were recovered from the arrested suspects who were later shifted to an undisclosed location for questioning. – Dawn