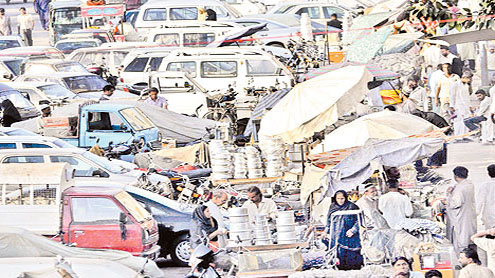 KARACHI: An organised mafia is patronising encroachments of roads and footpaths in busy market areas of Karachi and the administration is too afraid to take on these powerful people, said All Pakistan Organisation of Small Trade and Cottage Industries (APOST&CI) Karachi president Mehmood Hamid.

He said all traditional market areas of the city, including Empress Market, Bohri Bazaar, Jamia Cloth Market, Marriott Road and Liaquatabad are infested with illegal encroachments on roads and footpaths. He said shopkeepers of these markets faced revenue losses as well-to-do families do not come here for shopping due to lack of parking space and encroached streets and footpaths which make it difficult for buyers, particularly ladies to move with ease.

He said massive encroachments in market areas particularly in Saddar area have made its roads and streets cloggy for traffic flow, resulting in frequent traffic jams and alarmingly high levels of smoke and noise pollution. Vendors occupy 40 to 70 percent width of streets and roads, while shopkeepers and vendors, allowing very little space on streets and footpaths for vehicular traffic and pedestrians, also mostly occupy footpaths. Despite repeated announcements of KMC, Commissioner Karachi and municipal authorities of district south any operation is yet to be taken to vacate the streets and footpaths.

It is said that roadside encroachment is a multi-million business involving some big stakeholders at administrative, police and political levels. As each and every vendor pay bribe called Bhatta, they enjoy an unwritten permission to do business on streets and footpaths at the cost of motorists and pedestrians.  Hamid said that the small traders had raised this issue on many forums and they also met Karachi and requested him to remove the menace of illegal encroachments but to no avail. He said it is an open secret that KMC people, area police and dominant political groups collect bhatta from these illegal encroachers.

That is why despite a lot of hue and cry of citizens, no firm action is yet to be taken against these violators of civic laws. He says the main hurdle in removing illegal encroachments is political groups who firmly oppose anti-encroachment operations in their fiefdoms in the name of law and order situation. If the administration ever takes some action these very groups offer tough resistance. The bureaucracy is fully capable of removing these encroachments but it has also to obey the order of ruling politicians.To befool the citizens, the bureaucracy instead of a taking a simple and practical action to remove these encroachments opt for very costly and time-consuming projects like erecting yet another parking plaza after spectacular failure of the first parking plaza of Saddar constructing with a huge cost from taxpayers money.

There is also a novel idea of ‘Pedestriansation of Saddar’ on which work is expected to begin next month. However, the bureaucracy is not ready to understand that construction of infrastructure is no answer to the issue of encroachments in Saddar, but it is simply the matter of showing the writ of law. Many roads of London are narrower than the road of Saddar but they never face a traffic jam, as London municipal administration has a zero tolerance for roadside encroachments.  Hamid said it is an old and persisting demand of citizens and traders to take a decisive, comprehensive and sustainable action against those involved in encroaching roads and footpaths, and ensure that after the successful operation there is a foolproof mechanism on ground to prevent reemerging of the encroachments, as per past practices. -Dailytimes