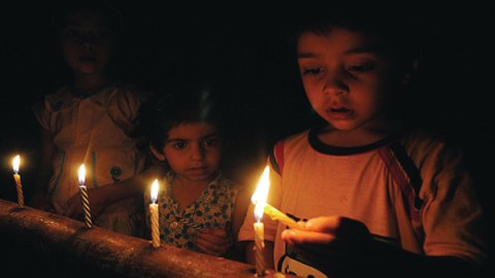 ISLAMABAD – Despite the tall claims by the government of ending power load shedding during Ramadan, there appears to be no end to electricity outages.

The power shortfall has gone up to 5,500 megawatt, resulting in around 13 hours of load shedding in urban and 15 hours in rural areas of the country. And power also remained absent in several cities at exactly Seher and Iftar times, despite the government’s claims of ensuring power supply at these two times. The power generation, which was taken up to the level of 14,000MW a few days ago, has once again come down to 12,000MW, with the demand maintaining itself at 17,500MW.

A spokesman for the Energy Management Cell attributed the shortfall to limited supply of furnace oil to power stations, besides the closure of the Chashma-I and Chashma-II plants that were contributing 650MW. He said PSO had cut down the supply of furnace oil due to non-payment and power stations were currently receiving 20,000 tons of furnace oil, instead of 38,000 tons a day. An official said that the government had allocated only Rs119 billion of the total Rs 338 billions for WAPDA for the fiscal year 2011-12. Half of amount remained un-audited just to hide the utilization of funds from the general public.

Similarly, the cost of Mangla Upraising Project rose to Rs 102 billion from the estimated Rs 62 billion merely due to unnecessary delays in releasing funds by the government. Financial irregularities also remained another hallmark of the government as Neelum-Jhelum Hydro Project was required to be ensured by the NICL, but concerned officials got bank securities from non accredited financial institutions. The official further said that amid such prevailing sorrow state of affairs, the government was required to fix power tariff in accordance with the rules and regulations set by National Electronic Power Regulatory Authority (NEPRA) with a special focus on ‘Energy Conservation’ to overcome the challenge confronted by the nation. -Pakistantoday