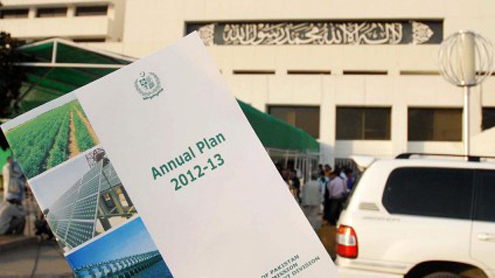 As Finance Minister Abdul Hafeez Shaikh began his budget speech, 25 to 30 PML-N parliamentarians surrounded him as well as Prime Minister Yousaf Raza Gilani and filled the space between Shaikh’s podium and the NA speaker’s dais, heckling and shouting. To avert an attack on the prime minister and the finance minister, PPP lawmakers Imtiaz Safdar Warraich, Begum Nasim Akhtar Chaudhry, Javed Iqbal Warraich, Jamshed Dasti and Nauman Islam Sheikh formed a human shield and kept pushing the angry PML-N parliamentarians away. The repeated warnings by the NA speaker asking parliamentarians to observe rules and regulations fell on deaf ears as the enraged PML-N members continued chanting slogans against the president, the prime minister and the government. “End load shedding,” they cried. “This government is stealing electricity”, “the corrupt rulers should quit”, “let the poor live”, “respect the constitution” and “people want electricity, water and gas”, they shouted. The opposition was seen visibly divided as other opposition parties such as the JUI-F, and the PPP-Sherpao were not seen actively participating in the rumpus.

In the absence of their party chief Fazlur Rahman, the JUI-F parliamentarians remained seated and kept watching the ugly scene unfold in front of them. Some member from both the sides tried to defuse the situation when PML-N legislators Shakeel Awan, Hanif Abbasi, Shahid Khaqan Abbasi, Capt (r) Safdar, Sohail Zia Butt and PPP’s legislators Javed Iqbal Wariach, and Rai Mujtaba Kharal started trading punches. The efforts, however, remained unsuccessful and yet another scuffle started between PPP’s Jamshaid Dasti and PML-Ns’ Umar Sohail Zia Butt which was defused with the timely intervention of Interior Minister Rehman Malik and some member of the PML-N. Women parliamentarians, PPP’s Firdous Ashiq Awan and PML-N’s Anusha Rehman also exchanged harsh words. Their verbal brawl lasted almost 20 minutes.
Later, rejecting the federal budget 2012-13, Leader of the Opposition in the NA Nisar Ali Khan, who did not attend budget session, told reporters at the Parliament House that the government had “lost its senses like a lost gambler”.

“The sloganeering of the PML-N parliamentarians in the House was the reflection of the sentiments of the people of the country… today masses are facing inflation, terrorism and outages of power but the rulers are not listening to their cries of pain,” he said.
Ahsan Iqbal told reporters that the rulers had ended the masses’ desire to live. “The government’s budget score is minus zero… the economy has collapsed in the last five years,” he claimed. JUI-F leader Attaur Rehman called the budget a replica of the past four budgets, adding that nothing new had been mentioned in the budget document. -Pakistantoday