by top3
in Business, Pakistan
7 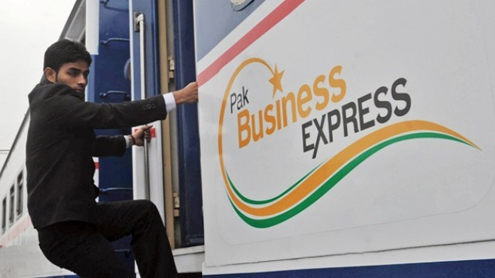 General Manager Railways Operations Saeed Akhtar, IG Railway Police Syed Ibne Hussain, Director Business Train Project Mian Shafqat Ali and CEO Zaffar Iqbal Chaudhry, LCCI former vice president Aftab Vohra were also present there.While talking to media, Railways Minister Ghulam Ahmed Bilour said that it was the first train under the private-public partnership and it would prove a new era for the revival of the largest public sector department of the country. He said the private operators had maintained all the boggies of the train and installed modern facilities to cater to the requirement of the passenger for their comfortable and timely journey. The minister said that following this precedent more train are being launched under joint ventures.

The minister as well as other notable were garlanded and showered with petals. The train left the platform for Lahore after prayers led by the minister. Director Business Train Mian Shafqat Ali said that the 50 percent seats of the train were booked for Karachi and he expressed his hope that the train attract more passengers in near future due to its unique features and timeliness. The train will daily depart from Karachi cantonment station at 3:30 pm sharp and reach Lahore at 10 ‘o clock in the morning.It is note worthy that along with other passenger a newly wed couple and their family member were also travelling to Lahore. Earlier, the railways minister also see off four freight trains with rehabilitated engines after the department overcame the fuel and locomotives shortage.

Malik asks Nisar to take back words against Army

Malik asks Nisar to take back words against Army