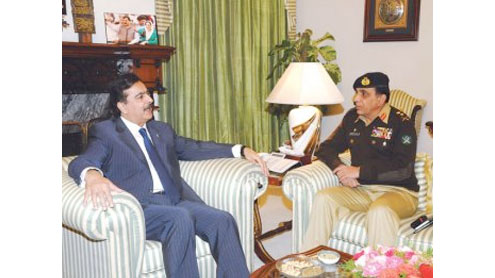 During the meeting PM welcomed the statement given by army chief in support of democracy saying government would play its respective role to strengthen democracy. He went on to say sacrifices rendered by army in war against terrorism were more than others and government would meet the defense requirements of armed forces despite its limited sources.

The international community should stop ignoring the sacrifices made by Pakistan in war against terrorism, he said adding role of armed forces remained vital in elimination of terrorism.

Sources told Online post NATO strikes situation was discussed at length in the meeting. Both PM and Army Chief expressed their resolve that national security and sovereignty of the country would be given top priority and no pressure would be accepted on this count. Army chief briefed the PM on professional matters of the armed forces.