Time for govt to go: Nawaz 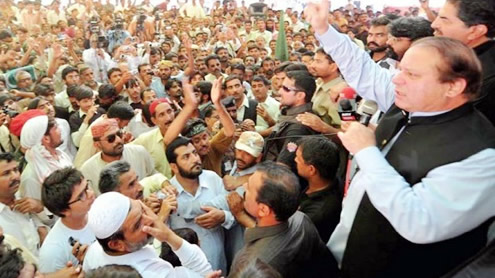 Speaking at a large public gathering at Central Park Chistian on Thursday, the former prime minister said that there was no electricity, gas and water in the country. Sharif said that corruption was at a level which had never been witnessed in the country before.“I have never seen such a huge corruption in my life,” he added.

He said people were starving but the government was not concerned at all about this.The PML-N president further said that he was ready to hold another long march to bring a revolution in the country and would work with the people to form a new Pakistan.Sharif added that present situation in the country was unacceptable and that his party would support the people by winning the next elections.

He said country had been pushed to poverty which was rising rapidly and the people were struggling to make their both ends meet but authorities were unmoved.He said wrong policies had brought a nuclear state to its knees. PML-N, after coming into power, would end corruption and work to resolve people’s problems, he claimed.

He said people were suffering because of gas and power cuts, inflation and joblessness.“I will provide jobs to people and the country will prosper when the PML-N comes to power,” he added.He said a new route of Motorway would be planned for Bahawalnagar and Chishtian and the area would enter a new era of progress. He said he would bring about a revolution of prosperity in the country.Taking to task the Federal government, he said hunger, unemployment and exploitation had become order of the day.

He said government’s huge spending from national kitty was intolerable. Sharif said PML-N, after coming into power, would provide loans to youths on easy terms, so that they could earn their livelihood in a respectable way with no fear.Earlier, Sardar Zulfiqar Khosa, Begum Tehmina Doultana, Abdul Ghafoor and Asif Manzoor Mohal addressed the public meeting. Foolproof security measures were adopted and city’s entrance and exit points were sealed. A large number of provincial government employees also discharged ‘strictly imposed’ duty at PML-N chief’s address to public meeting.