by ToP
in Business, Pakistan, Sindh
0 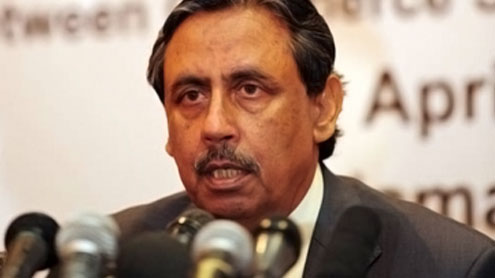 KARACHI: Pakistan-Indonesia Business Forum (PIBF) was launched here on Sunday. Patron-in-Chief of PIBF, Ambassador of Indonesia Ishak Latuconsina, and president PIBF Abdul Majid Haji Muhammad signed a memorandum in this regard at an inaugural ceremony held at a local hotel.

Latuconsina while speaking on the occasion said that the PIFB would provide a platform to the business communities of the two countries for enhancing bilateral trade linkage and exploring the opportunities of close cooperation.He said the PIBF was aimed at providing opportunities of collaboration to corporate sector. Latuconsina hoped that Pakistani friends would utilise the PIBF to explore potential business prospects and to deepen their existing partnerships with Indonesia.

He said the participants of various distinguished members of the business community reflected the association and affiliation with Indonesia as a brotherly country as well as the mutual desire to further strengthen bilateral friendly relations.“We are witnessing today the opening of a significant new chapter in the trade and business interaction and discourse between the business communities of Indonesia and Pakistan with the inauguration of the PIBF.

We have reached this decision to launch the PIBF after long discussions and suggestions from those businessmen, who already have business with Indonesia. We all unanimously agreed that this forum will be an important venue for helping the entrepreneurs of both sides to expand their business interests”, Latuconsina said.

The ambassador said: “I fervently believe that it is a timely initiative since the negotiations for Indonesia-Pakistan Preferential Trade Agreement have already been finalised successfully in Jakarta last month, which will lead to the Free Trade Agreement (FTA) soon.”The PIBF platform will certainly provide new opportunities of collaboration in a coordinated way to the business communities of both sides to project their interests and their priorities, he added.

In addition, it will also provide the opportunities to exchange ideas and develop coherent strategies to further promote their business plans. The inauguration of PIBF highlights the rapidly growing trade ties between two countries and will certainly raise the bilateral trade volume and economic activities in future, he maintained.

He said: “The PIBF is launched when the environment is very conducive for bilateral trade as we have many supporting factors at this particular time such as Indonesia’s Chair of ASEAN, Pakistan focus on Vision East Asia Policy, signing of the trade agreement on PTA, emergence of ASEAN as the future market and the strong desire in the business community of both sides to enhance and strengthen the trade linkages.He hoped that the members would devise a pragmatic strategy to enable greater contacts for enhanced flow of trade and investment.

President PIBF said Pakistan and Indonesia had historical relations but they lacked mutual business forum that had helped them to promote their trade. He said the volume of trade was very low between Indonesia and Pakistan which needed to be boosted at sufficient level and the forum would play a pivotal role in this regard.

He noted the inauguration of the PIBF was another significant development in the bilateral trade relation of the two countries in a short time after the finalization of the negotiation for Indonesia-Pakistan Preferential Trade Agreement in Jakarta last month, which will lead to Free Trade Agreement soon.The PIBF will serve as an important source of valuable information for enhanced two-way trade between the business communities of Pakistan and Indonesia besides providing new opportunities of collaboration in a coordinated way.

“The PIBF is also expected to bring considerable raise in the bilateral trade volume and volatile economic activities in future. At the same time, it is also aimed at bringing the corporate sectors of the two countries closer to each other through extensive net working, exchange of information and regular visits by the trade delegations,” he added.

Chief guest, Secretary Commerce, Government of Pakistan, Zafar Mahmood said the government was working with sincerity as it urged the world that ‘we do not want to aid but want trade’.Member PIBF Majid Aziz said, “We should work with South Asian friends which are closer to us rather than going far.” He stressed the need to develop strong resolution mechanism in business and a lot of attention in tourism between the two countries.Chairman Sindh Board of Investment Muhammad Zubair Motiwala laid emphasis on boosting trade among Muslims countries. He said that it was astonishing fact that the largest export of halal foods was carried out by non-Muslim countries.

He urged Muslims countries to promote halal trade and technology transfer, including utilizing skilled manpower. Renowned businessman, Siraj Qasim Teli and Provincial Minister Raza Haroon also spoke.It is worth mentioning here that Pakistan and Indonesia together make an ever growing market of more than 440 million people, which offers tremendous opportunities of businessmen and economic entities for building a sound economic partnership. – Dailytimes