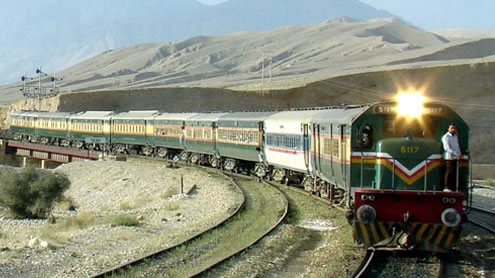 ISLAMABAD, Oct 6 (APP): A delegation of the Lahore Chambers of Commerce and Industry (LCCI), headed by its President Irfan Qaisar Sheikh called on Prime Minister Syed Yusuf Raza Gilani here at the PM House on Thursday afternoon. The LCCI delegation informed the Prime Minister that they had completed all the formalities with the Railway Ministry to run a business train from Karachi to Lahore, and it would start its operation in December this year. They apprised that the upgradation of coaches and locomotives was underway which will be completed well ahead of schedule. The non-stop fast train will reach its destination from Lahore to Karachi within 18 hours.

The members of LCCI delegation gave useful suggestions to the Prime Minister to augment tax collection by simplifying the procedure which is at present too complicated and intimidating.They invited the Prime Minister to preside over a meeting of the Federation of Pakistan Chambers of Commerce and Industry (FPCCI) in Lahore. The Prime Minister accepted the invitation and assured them that he would come to Lahore at an early date.

The Prime Minister sought the assistance of business community to make the Public Sector Enterprises profitable which are causing huge losses to public exchequer due to bad management and structural flaw in the Organizations.
The Prime Minister particularly mentioned Pakistan Railways and the Pakistan Steel Mills.
Gilani said that he would ensure effective participation of business community in the Board of Governors of the Public Sector Enterprises.

The lights are out – Much too much