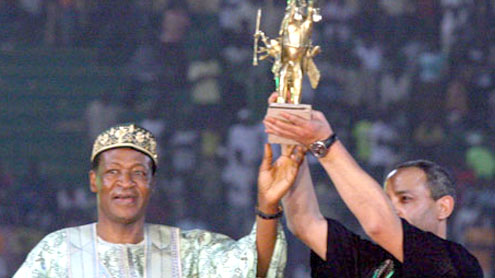 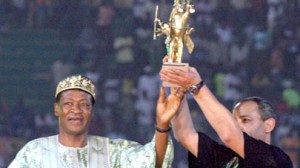 It is late afternoon in Ouagadougou, a landlocked city in one of the world’s poorest countries. Forty thousand people are packed tightly into a vast stadium, originally built to celebrate the renaming of Upper Volta as Burkina Faso, “the land of upright people”. A thermometer shows that it is 100˚ in the shade. A posse of soldiers in bright red ceremonial uniforms and gold-braid shoulder pads march forward in two columns, sabres drawn, as a band strikes up the national anthem. Everyone in the stadium stands up – the president is about to arrive. Are we all here to honour visiting royalty? Only when a giant 6ft-square electronic clapperboard is activated does the reality hit home. This is the opening ceremony of Fespaco, the bi-annual celebration of African cinema.No film festival in the world comes close to rivalling the magnificence and ambitious scale of Fespaco – the Festival Panafricain du Cinéma et de la Télévision de Ouagadougou. Every African country submits work to its selectors, so the films on offer represent a unique snapshot of the contemporary African psyche.Making a documentary about it is just about the best way to get plugged in to such a huge event. Throughout the week, my colleagues and I from the soon-to-be-launched internet channel Hibrow filmed all over the city. We went to Imagine, the inspirational film-making school where Gaston Kaboré, the Martin Scorsese of African cinema, had hosted seminars on subjects as varied as mythology and legend in Hollywood storytelling, and film training in Africa. We visited an eccentric outdoor cinema called Cine Oubris. At Fespaco’s HQ, we filmed the premieres, press conferences, the transport of dozens of new 35mm prints from the brand-new Cinematheque to the myriad of festival screening venues all over the dusty city. In the suburbs, we filmed cinephiles going to the movies on “motos”, the small motorbikes that are the vehicles of choice.

The ultimate scoop lay before us, however – a chance to shoot the breeze with President Blaise Compaoré. A few of the Hibrow team had been invited to join the president for dinner at his palace – along with a few hundred guests. In what was clearly the state banqueting arena, though it was outside – fountains, huge screens, a stage built around a swimming pool – we were seated within feet of the presidential table. His wife even came over to introduce herself and shake our hands. So I figured the time was right to venture an interview with the man himself. What hubris! This was the man who had staged a successful military coup and had ruled his country for 25 years. What chance for us?We had gingerly shuffled to within a few feet when a very large official dressed in flowing Burkinabe robes came over, and told us he was the president’s head of protocol. He made it very clear we were not welcome to pay our respects. The armed security men accompanying him made this even more clear. We hobbled back to our seats, shamed into understanding our insignificance. The firework display and the Château Mouton Cadet 1998 restored our dignity.

Africa is alive to the opportunities that exist for film-makers, and audiences are hungry for films that show them as they are, and not as some European director or Hollywood producer wants to show them. Documentaries were also very powerful – the documentary jury was led by the brilliant Egyptian director and journalist Jihan El-Tahri, who spoke movingly about the plight of her country and the position of women film-makers in world cinema. Pegase, directed by Morocco’s Mohamed Mouftakir, cantered off with the Golden Stallion, the festival’s top prize. This tiny, underdeveloped country has been providing for all its continental neighbours a vehicle to celebrate and perpetuate cinematic excellence for more than 40 years, officially sanctioned and financed by the state. Could we ever match that kind of fervour and commitment to cinema in Britain? – Guardian

Muslim hearings in US Congress dismissed as ‘equivalent of reality TV’

Muslim hearings in US Congress dismissed as 'equivalent of reality TV'