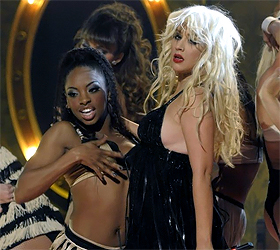 The X Factor is facing a massive backlash from viewers after thousands of viewers have complained over Christina Aguilera & Rihanna’s ‘disgusting’ dance routines being shown before the watershed. The telly-watching busybodies have been phoning up TV regulator Ofcom in utter outrage after deciding that the U.S. pop princesses have broken Ofcom’s broadcasting code which seeks to protect children from sexualised content.

First Christina; she performed her new single ‘Burlesque’ from the movie of the same name, and lets be honest, with the title Burlesque, it was pretty clear we weren’t in for The Sound Of Music here… there were women prancing around in next to nothing, simulated sexual moves and ‘porn imagery’ according to reports. Then we have Rihanna, who, during her performance of ‘What’s My Name’, stripped off her dress and cavorted around the stage in oversized bra and pants whilst performing a series of suggestive dance moves. But let’s just hope the people complaining don’t buy their children and Lady GaGa CD’s – the lady who pretty much made bras, pants and sexualisation fashionable again.

Obviously we then had the Harry Styles debacle where he was seen telling winner Matt Cardle something along the lines of; “Think of all the pu*sy you’ll get” … but what do YOU think, is it all just too much for telly? Or should we just chill out and get to grips with the adage that ‘sex sells’? At the very least, it’s gotten Harry, Xtina & Rihnna some extra publicity – FemaleFirst