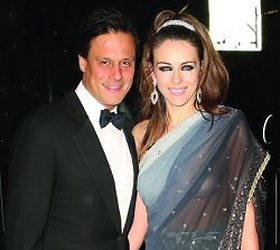 Elizabeth Hurley has taken to twitter to praise estranged husband Arun Nayar as a ”great father” to her eight-year-old son Damian. Elizabeth Hurley has praised Arun Nayar as a “great father”. The model-and-actress – who confirmed earlier this week that her three-year marriage had ended “months ago” – insists the Indian textile heir will always be part of her eight-year-old son Damian’s life.

Elizabeth announced the end of her marriage following revelations she had grown close to Australian former cricketer Shane Warne. A source said: “Shane has been a real support through the tough time she’s had splitting with Arun. They have grown very close and there is an intimate bond between them. The only thing standing in their way is geography.”

Now the break-up has been made public, Arun is said to be “embarrassed” by the revelations because of how people will receive the news in his native India. A pal said: “He’s hugely embarrassed and upset. This will be devastating for him. The family had no idea their relationship was over. “It’s very shameful in India and the family will all be deeply shocked this has come to light. Arun is very upset by the whole thing and feels let down.” FemaleFirst