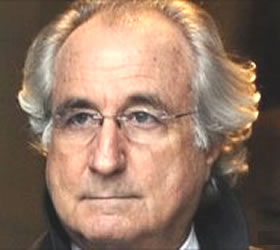 Swiss bank UBS is being sued for over $2bn (£1.3bn) amid claims it concealed the Ponzi scheme of fraudster Bernard Madoff that lost clients billions.Irving Picard – who is acting as trustee for Madoff’s victims – lodged the lawsuit against UBS and various associates at a US bankruptcy court.The bank, which has made no comment on the charges, earned fees for promoting and administering Madoff’s funds.Madoff was sentenced to 150 years in prison for the scheme exposed in 2008.The fraudster claimed high and stable returns for his investment fund over many years, attracting large investments from wealthy individuals.In reality, the fund was worth only a fraction of what he claimed, and Madoff relied on “feeder funds” – such as those managed by UBS – in order to attract new investor money that could then be used to pay out the bogus return to existing investors.’Aura of legitimacy’.

“Madoff’s scheme could not have been accomplished unless UBS had agreed not only to look the other way, but also to pretend that they were truly ensuring the existence of assets and trades when in fact they were not and never did,” said David Sheehan, a lawyer acting on behalf of the trustee, Mr Picard.The lawsuit claims UBS and its co-defendents made approximately $80m in fees over several years from their work with Madoff.UBS “chose to enable Madoff’s fraud for their own gain”, claimed the trustee, and the bank’s involvement gave the fraudster “an aura of legitimacy”.The Swiss bank is not alone in being accused of complicity in the fraud.Mr Picard has filed at least 19 other lawsuits against other feeder funds, and is seeking to recover $17.5bn in total, including the money claimed from UBS – Bbc

Ferrari World Abu Dhabi Off to a Flying Start

Ferrari World Abu Dhabi Off to a Flying Start