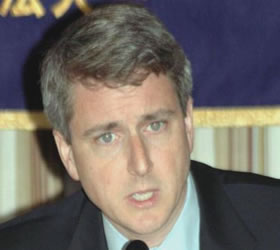 WASHINGTON, Oct 12 (APP): The World Bank and the Asian Development Bank will sketch out preliminary findings from their damages and needs assessment following devastating floods in Pakistan at an international meeting in Brussels Thursday, a senior U.S. official said Tuesday.Dan Feldman, Deputy Special Representative for Pakistan and Afghanistan, said the two banks will share the findings of their study – carried out in the wake of this summer’s unprecedented monsoon flooding in Pakistan – with the international community on the eve of a Friends of Democratic Pakistan meeting due to take place in Brussels on Friday.“The World Bank and the Asian Development Bank have both agreed to give a first preview of the damages and needs assessment, which they undertook in terms of long-term reconstruction needs for Pakistan,” Feldman revealed at a State Department briefing.The study by the two financial institutions has not been finalized as yet.The U.S. official did not specify how much money Islamabad would require to accomplish a challenging reconstruction task in the vast flood zones but estimated it would run into tens of billions of dollars.Feldman hoped that the “meaty” presentation by the two banks on Thursday will provide the major interantional donors with a picture of what needs to be done and help them devise ways they can assist Pakistan with sector-by-sector rebuidling or with specific projects when the country begins the expensive reconstruction phase over one fifth of its land – equal to the size of Italy.
The U.S. delegation at Brussles meeting will be led by Special Repersentative Richard Holbrooke, recently confirmed American ambassador to Pakistan Cameron Munter and senior aid officials. Foreign Minister Shah Mahmood Qureshi will head the Pakistani delegation.
“It is not a pledging conference — we are hoping to get all the key players together to think about what needs to be done in Pakistan and come at a later day with specific projects,” the diplomat said.
Besides the post-flood recovery efforts, the FoDP meeting will also focus on the previously anticipated subjects including energy sector reforms and Malakand reconstruction plan.
The Brussels meeting will be followed by a Pakistan Development Forum moot in Islamabad in November, where the Pakistani leaders will apprise the international community of the country’s reconstruction plans – App