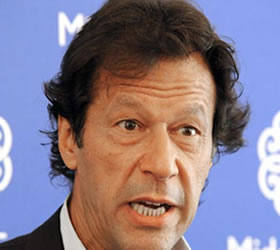 LONDON, Oct 12 (APP)-A charity event for Imran Khan Flood Relief (IKFR) raised over 100,000 pounds for the floods victims in Pakistan.Speaking at the event organised in East London last night, Chairman of Tehreek-e-Insaf, Imran Khan gave an overview of what IKFR was doing in the short, medium and long term for the flood victims in Pakistan.He said at present IKFR has provided immediate relief by sending trucks full of food and medicine to 35,000 families.  Also 55,000 families have been helped through medical relief centres that have setup. The IKFR is also providing seeds to 200,000 farmers in time for the next harvest to prevent food shortages next year.He then went on to describe the model villages that IKFR is building which include houses, proper sewerage, water and electric supply lines, roads, a medical centre, a community centre, a school and other amenities as well as seed and livestock for the families.
The IKFR plans to build approximately 100 of these model villages based on impartial selection through a ballot.  A village can comprise of 200 to 1200 homes depending on the size of the community.An average home costs approximately Pak rupees 125,000 to 150,000 .  However this cost will vary across provinces.  Imran said a village will cost approximately 500,000 pounds adding that IKFR will also provide zero percent micro financing so that people can re-build their lives.
He also said that IKFR is committed to keeping the administration’s costs at a minimal which are at 0-1 % at present and will be kept at this mark.  Imran  explained that people all over the world can participate in this effort by ‘adopting a village’ as part of the reconstruction / rehabilitation phase.
The IKFR is also working with Google Pakistan to avail the technology that will enable people to see the progress of each village.
He further mentioned that IKFR has used the advice of the Disaster relief agencies to formulate the medium and long term plans. He also informed the gathering of  the governance structure of IKFR including the Board members and engagement of reputed Chartered Accountancy firm for auditing the IKFR accounts.
The party’s UK co-ordinator Rabia Zia provided an update on the funds collected thus far by IKFR in the UK which total 657,000 pounds – App