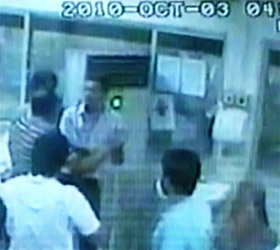 LAHORE – Jinnah Hospital remained out-of-bounds for the emergency patients for hours on Sunday as doctors closed down the facility following a clash with the attendants of a female patient in the early morning.

All efforts of hospital management to open the emergency proved a futile exercise as the doctors flatly refused to work or allow operation at the facility till fulfillment of their two demands, proper security at the hospital and arrest of over a dozen people involved in manhandling of duty doctors. After constant refusal of the junior doctors, the hospital management opened the facility partially at around 5:00 pm by appointing senior registrars at medical and surgical emergencies.

The hospital management also got registered a case against unknown persons with Garden Town Police Station. According to the reports, the police arrested two accused in the evening. The management also constituted a five-member inquiry committee to probe the incident and submit recommendations for better security measures in the hospital premises.

The visiting patients and their relatives were the ultimate sufferers of hours long closure of emergency, as they had no other option except to run to Shaikh Zayed Hospital or private healthcare centres in the close vicinity. The closure of Jinnah Hospital emergency, both medical and surgical, caused over one thousand patients and their relatives to run to other public sector and private healthcare centres. Jinnah Hospital emergency daily accommodate around 1,500 patients.

Jinnah Hospital witnessed yet another incident of clash at around 4:30 am that led to doctors’ strike and closure of medical emergency. Soon after the incident at medical emergency, doctors at nearby surgical emergency also went on strike to support their colleagues.

One house officer Dr Zahid received injuries on his head. After thrashing the doctors, the unknown persons took the female patient and fled from the hospital premises.

After the unpleasant incident, the doctors forced the patients out of emergency and closed the facility. The nearby surgical emergency was also closed down to record protest with the management.

Scuffle and ultimate closure of emergency has become a routine matter for Jinnah Hospital. The emergency witnessed days long closure following a clash between doctors and attendants that later also caused thrashing of journalist on March 31. The emergency remained closed for about two hours following thrashing of doctors at the hands of a PML-N MNA’s men on March 7. The management locked the hospital from inside following a terrorist attack on the hospital premises on June 1 – Nation